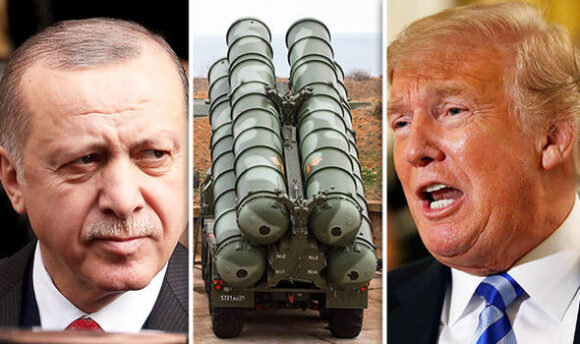 Like a lorry in downslide without brakes, Turkey continued on its path of defiance to the West with the reported missile test launch of the Russian-made S-400 anti-aircraft system on the shores of the Black Sea, to the vehement protestation of the US.

(Update 3): The United States on Monday imposed sanctions on Turkey over its purchase of Russian ground-to-air defenses and targeted the top Turkish defense development body, its president and three employees.
The sanctions include a ban on all US export licences as well as asset freezes and visa restrictions for SSB’s president, Ismail Demir, and three other employees. They threaten to damage Turkey’s economy at a time when it is struggling with a coronavirus-induced slowdown and double-digit inflation.
The US Secretary of State Mike Pompeo said he has urged Turkey to resolve the S-400 issue in co-ordination with the United States.
“Despite our warnings, Turkey moved ahead with its purchase and testing of the S-400 system from Russia. Today’s sanctions on Turkey’s SSB demonstrates the US will fully implement CAATSA. We will not tolerate significant transactions with Russia’s defense sector,” Pompeo said in a tweet.

(Update 2): Defense Minister Hulusi Akar indirectly confirmed the S-400s test launch by stating that the air defense system will not be integrated into NATO systems and will be deployed independently.

(Update 1): Turkey failed to successfully test an S-400 missile system purchased from Russia, according to a report in the Russian media.

NATO-member Turkey has tested its Russian-made S-400 Triumph advanced air defense missile system, Turkish media reports said Friday, raising the specter of a new standoff with the United States.
A Haber television, which is close to the government, said on its website that Turkey’s military test-fired the S-400 in the Black Sea province of Sinop. It based its reports on an amateur video, reportedly filmed in Sinop, showing a contrail shooting into the sky. Though unconfirmed, they show narrow columns of smoke snaking into the sky over that region, that do appear to be broadly consistent with S-400 missile launches that we’ve seen in the past. Other media carried similar reports.
A source in military and diplomatic circles told TASS Russian news agency that “Three missiles of the S-400 anti-aircraft missile system were launched. All of them successfully hit the designated targets.”

Turkish military and defense officials have initially refused to comment on the reports. According to previous reports, which were neither confirmed nor denied by the Turkish Ministry of Defense, the Turkish Armed Forces did not plan to “activate” the S-400 batteries, but would instead undertake tests of the equipment and the readiness of military personnel.

However, two days after the test launch, Defense Minister Hulusi Akar indirectly confirmed it by stating that the air defense system will not be integrated into NATO systems and will be deployed independently, thus rendering S-400s functioning at a very small percentage of their capacity. Minister Akar stated that S-400s will be used as an independent system, just like S-300s that some NATO members use. He added that all defense systems include their own test and system control.
Mr. Akar stressed that the purchase of the S-400s was a necessity for Turkey, and it will not distance Turkey from NATO, adding that Russia was the only country that responded positively to Turkey’s needs for an air defense system. Regarding a possible purchase of the Patriot Air Defense Missile System, he said Turkey has been conducting talks to buy a defense system made by France and Italy. If the conditions are met, Turkey also can buy Patriots from the U.S., he added.

Responding to reports of its activation of the S-400 system, the US State Department issued a statement saying that, “…if confirmed, we would condemn [it] in the strongest terms.” It warned of “potential serious consequences“ for its security relationship with Turkey if it activates the system. A US official, speaking on the condition of anonymity, said that Turkey had tested the S-400 system on Friday but did not provide details.

Spokesperson Morgan Ortagus added that an S-400 test missile launch is “incompatible with Turkey’s responsibilities as a NATO ally and strategic partner of the United States.” Ortagus, in the same statement, said that “…the US has been clear on our expectation that the S-400 system should not be operationalized.  We have also been clear on the potential serious consequences for our security relationship if Turkey activates the system.”

Endangering NATO’s flights…
The live-fire test suggests that Turkey has no intention of stashing the S-400, regardless of objections from Washington or Brussels. Even if and when S-400s are activated, they will only function at a very small percentage of their capacity because they can’t be connected to the electronic surveillance network in Turkey. A NATO diplomatic source said that the system can pose a risk to Allied aircraft and can affect relations among NATO allies (see: “Will Turkey dare to dissolve NATO’s Southern Flank?”). This is a national decision for Turkey to make, but the S-400 cannot be integrated into NATO’s air and missile defense system.
The United States and NATO have been transitioning from the “Mode 4” aircraft-identification system to a next-generation encrypted “Mode 5” system. This Identification Friend or Foe (IFF) system allows NATO air defence batteries and aircraft to discern whether an unknown aircraft is a friend or foe. The United States will not allow the S-400 to have “Mode 5” capabilities, as doing so would allow Russia to break NATO identification codes and quickly identify aircraft.
However, excluding Turkey’s S-400s from NATO air defence systems would leave Turkey potentially shooting blind in a conflict, when life-and-death decisions are made in seconds. Accordingly, in such a scenario, Turkey would struggle to differentiate NATO from adversary aircraft, potentially resulting in “Blue on Blue” situations, that is downing either friendy NATO aircrafts, or even more its own aircrafts. This reality would make Turkey a less capable NATO ally and increase the risk for U.S. and allied pilots operating in or near Turkish airspace.

The Pentagon, separately, said that the S-400 should not be activated. “Turkey has already been suspended from the F-35 program and the S-400 continues to be a barrier to progress elsewhere in the bilateral relationship,” a Pentagon spokesman said.
In response to allegations that Turkey conducted the first tests of S-400s, the U.S.’ NATO Ambassador Kay Bailey Hutchison said that it is problematic that Turkey tested S-400s within NATO territory. She added that Turkey sacrificed many benefits in order to own S-400s. “We, along with our all NATO allies, did whatever it takes to make Turkey give up buying missile defense system from Russia, which we recognize as an enemy. Buying a missile defense system from Russia and placing it in our NATO alliance … this is a redline. No doubt about it,” she explained.
During a visit to Turkey earlier this month, NATO Secretary General Jens Stoltenberg reiterated that the Russian-made S-400 system cannot be integrated into the NATO air and missile defense system and can lead to sanctions by the United States.

If it is confirmed, firing the missiles would likely breach the Countering America’s Adversaries Through Sanctions Act (CAATSA), which targets those who do business with Russia’s defence sector. The U.S. has repeatedly expressed concern that Turkey’s use of the Russian made system could jeopardise NATO’s operational security and reveal intel on its next-generation F-35 fighter jet programme.

In any case, the purchase of the Russian S-400 air defence system has been proved the most ineffective arms procurement in Turkey’s defence history. The move has deprived Turkey of the 5th generation F-35.
Turkey failed to successfully test the S-400 missile system purchased from Russia, according to a report in the Russian media. Videos posted on social media appeared to show the S-400 being fired, but no explosions were observed. The videos published by the Turks show the rocket launches and it all ends there. Nowhere does the moment of the hit of the target seem to have been recorded, nor was there the sound of the explosion of the missile warhead.

One expert told Avia that no flight trace of any targets were seen, nor was there any explosion of the missile’s warhead. Furthermore, the missile took a straight path, suggesting no target was engaged, according to the expert. Maybe this is the real reason why they have not released -so far- videos from the Turkish Ministry of Defense, nor has there been any other leak that proves the opposite of the Russian allegations.
However, the Turkish media reported that a total of three targets were hit, but in the numerous videos one can see only one launch, which also raises many questions. Even a video posted from the S-400 test by Uğur Giresun, chairman of the ruling AKP party Sinop’s local branch, shows three striking launches from different angles but nowhere to hit a target or targets.

The test on Friday failed because Turkey refused to employ Russian specialists, news website Avia, which specialises in military affairs, reported. The S-400 can only be tested against missiles or combat aircraft, not against small drones, the expert said. The absence of a trace of a target flight, the absence of a missile warhead explosion and the straight flight path of a missile are worrying elements.

Ankara proceeded with Friday’s test of the S-400, acquired from Russia last year, despite threats of sanctions from the United States, which says the system potentially undermines NATO’s defences. Turkey and the U.S. are at loggerheads over several other regional issues including tensions with Greece in the eastern Mediterranean, and Turkish involvement in the Nagorno-Karabakh conflict. Nevertheless, President Trump has thus far proven hesitant to impose penalties on Turkey over the issue.
If confirmed, these S-400 tests appear to be another example of a broader strategy of asserting Turkey’s independent foreign policy aspirations and increasing its geopolitical influence from the Black Sea through to the eastern Mediterranean, one that has already caused significant frictions with its traditional allies.

Last but not least, investors are concerned that an increased probability of sanctions will lead to more losses for the fragile Turkish lira and further destabilise the country’s economy. The lira traded down 0.3 percent at 7.528 per dollar on Friday, just off an all-time low reached last week of 7.9591 per dollar.

You may read our previous extensive report about Turkey’s aquisition of S-400
Russian anti-aircraft missile system here:
“S-400 Games: How much of a real threat are…”