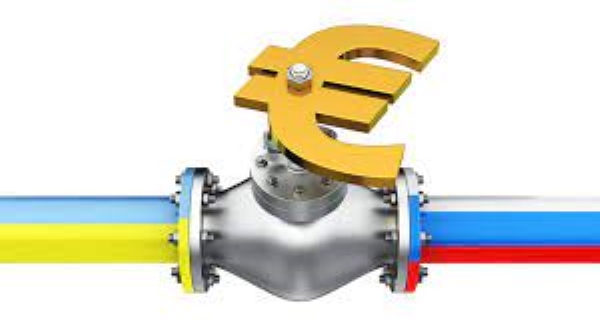 It’s been over a month since the war started Russia, however, is actually shipping more natural gas through Ukraine and Moscow is still paying Kyiv in full for transiting the fuel to Europe.

Contadictory and at the same time Interdependent interests

Ukraine’s President Volodymyr Zelenskyy, together with other Ukrainian officials, urge urbi et orbi the European Union and other western countries that the flow of “bloody money” to Russia must stop. To “stop sponsoring Russia’s military machine”, impose a full oil embargo and give up all Russian energy sources.
Nevertheless, daily gas flows from Russia at some point surged more than 50% from January lows, with shipments traveling through Ukrainian pipelines more than doubling as energy companies rushed to buy after the invasion. Exports from Europe’s top supplier became cheaper than buying gas in the spot market, and Russia is still paying for transit in hard currency, according to Yuriy Vitrenko, CEO of NJSC Naftogaz Ukrainy, Ukraine’s largest state-owned oil and gas company.

President Zelenskyy, also called for sanctions to be applied to Russia’s Nord Stream 1 pipeline which transports gas directly to Germany, while NordStream 2 has already stopped dead before its start, indifferent of the major energy crisis and economic recession this would result, and for the EU to demand that those gas supplies be channelled through Ukraine instead, providing more incentive to halt the war and make sure the transit routes are secure.

Kiyv, however, after 50+ days of war shows no intention or even try to put an end to this “flow of bood money that sponsors Russia’s military machine” and transits through its soil, avoiding significant risks to the integrity of the Ukrainian gas transmission system and the stability of gas transportation modes, including gas volumes. Ukraine has said before that Gazprom pays about $2 billion per year for gas-transshipment services.
Some experts say that both countries profit by keeping the gas flowing -Russia by selling the gas at high prices and Ukraine by collecting transit fees.

It’s an awkward situation for European policy makers too, who have imposed several rounds of sanctions on Moscow to try to starve President Vladimir Putin’s government of the cash it needs to fund the invasion.

This is because European Union has so far refrained from imposing sanctions or an embargo on Russian natural gas, to great disapointment of USA that is offering to assist with its too high priced LNG, due to the EU’s high dependence on Russian gas and insistence from major economies -including Germany- that a ban on Russian gas would lead to a deep recession in Europe.
Why then the Ukrainian President urges the E.U to deep recession, while he retains the flows of Russian natural gas through Ukraine’s pipeline grid which are still being paid by Moscow?

A major determinant of Ukraine’s geopolitical position until about a year before the Euromaidan Revolution was its mutually dependent relationship with Russia, a petrostate and worldwide exporter of energy, due to the large Ukrainian gas transportation system (GTS). Until 2011-2012, more than half of the West Siberian and Central Asian natural gas coming from Russia for the EU flowed through Ukraine. The annual revenues of the state-owned conglomerate Gazprom from its gas exports to Europe were then and remain today critical for the functioning of the entire Russian socio-economic system as well as certain foreign political operations.

Ukraine’s high geo-economic leverage vis-a-vis Moscow through its control of a large share of Russian gas exports until 2011-2012 was and, to a lesser degree, today is more important than the financial aspect of this interdependence. For the first twenty years after the break-up of the USSR, Kyiv could have cut off more than half of Russia’s natural gas exports to the EU at any moment. Russia had only limited alternative gas transport options until about a year before the Euromaidan Revolution began.

Bypassing Ukraine with a direct pipeline to Germany was an opportunity for Russia to advance its goal of isolating its former client state, now a fledgling democracy, from Western Europe. In September 2011, the interdependence of Kyiv and Moscow was already reduced by the commissioning of the first leg of the Nord Stream pipeline through the Baltic Sea. It decreased again after the ceremonial opening of the second leg of the first Nord Stream pipeline by German Chancellor Angela Merkel in October 2012. The third reduction of Russian-Ukrainian interdependence occurred with the start of gas flow through the Turkstream II pipeline via the Black Sea in January 2020. The start of operation of the Nord Stream 2 pipeline would make the Ukrainian GTS redundant for the EU-Russia gas trade. The project would have more serious geopolitical consequences than the often-cited loss of revenue that Ukraine would suffer from further detour of Russian natural gas to a new Baltic pipeline.
Moreover, the US along with Lithuania, Ukraine and Poland opposed Nord Stream 2 too, citing its security risk particularly for Ukraine and Poland, in bypassing existing gas transit in both countries.

The complicated geo-economy of Eastern Europe is often presented incompletely or distorted in Western mass media and even in some relevant expert debates. More than one month into the war, Naftogaz is caught in a complex geopolitical game. Even as Russia rains missiles onto Ukraine, it is still sending approximately 30 percent of the gas it sells in Europe through the country it has invaded.
And although Ukraine’s leaders have called for the continent to immediately halt imports of Russian gas, they are doing nothing to interfere with the gas flowing through pipelines at a rate of 40 bcm/year to customers including Germany, Austria, Italy, Slovakia, Hungary and the Czech Republic.

Window into the conflict’s geoeconomics

One may truly wonder what President Zelenskyy as well as other Ukrainian officials mean when they urge the European Union to a full oil embargo and give up all Russian energy sources. What do they have in mind and how is this supposed to be effected, while they are doing nothing to stop the flows through their national pipeline grid?

Russian gas will continue to flow to Europe through Ukraine as long as the operators of Ukraine’s gas networks are able to function. In January 2020, the two nations signed a five-year deal for the amount now moving through Ukraine’s pipelines.
Many energy analysts have said that Russia has maintained its shipments of natural gas through Ukraine to show its reliability as a supplier that fulfills long-term contracts. Russia’s state-controlled gas company, Gazprom, has commitments to corporations in Europe. If it fails to meet its contractual obligations, Gazprom would incur billions in financial contractual penalties.

Yuri Vitrenko, however, CEO of Naftogaz doesn’t see it that way. “There’s a simpler, more straightforward explanation: Russia gets a half-billion to a billion dollars a day for energy exports,” he says. If Russia reduces its exports, “they wouldn’t be able to finance the current war, pay salaries to its soldiers and all the crowds currently supporting Putin. It will immediately impact the regime’s support, which is why they don’t want to disrupt this revenue stream.”
Why then Ukraine doesn’t stop the gas flows to deprive Russia from these revenues? The answer provides a window into the conflict’s geoeconomics: if Ukraine took the initiative unilaterally and stopped the transit of natural gas supplies from Russia, they would be diverted to other pipelines and make it to Europe anyway. That, Vitrenko says “…could make Ukraine even more vulnerable to Russian bombs, extending of Ukraine’s destruction” (and also deprive it from substantial transit fees)

Naftogaz serves 12 million households, but it has been forced to cut off 300,000 that have been heavily damaged by Russian missiles. In light of the recent fighting, Ukraine’s priorities have been changed. “The country is at war, and there are still tens of millions of people in Ukraine who need heating, water, electricity, some critical utilities,” Vitrenko said.
This was a daunting prospect in normal circumstances. Now, international donors will need not only to focus on food assistance, but to channel aid to Naftogaz, the country’s largest state-owned utility. “When there’s a war, your expenses are up. People cannot pay,” Vitrenko said. “It’s not a business anymore. Basically it’s humanitarian assistance.”

Perhaps this is one of the main reasons that the Ukrainian President retains the flows of Russian natural gas through his country’s pipeline grid, that are still being paid by Moscow, while at the same time urges the E.U to deep recession…