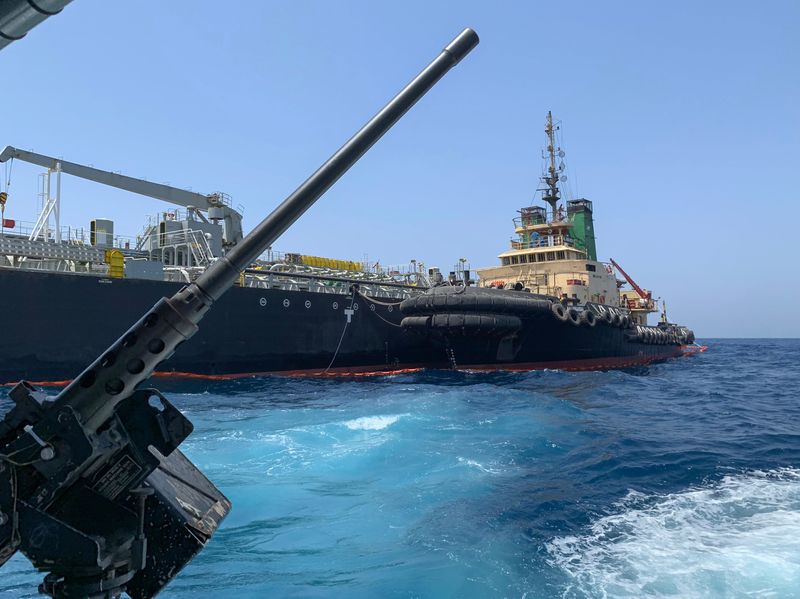 As tensions between the United States and Iran continue to simmer, President Donald Trump tweeted on Monday that countries that get their crude oil via the shipping routes in the Middle East should protect their own ships along the lanes, “China gets 91% of its Oil from the Straight, Japan 62%, & many other countries likewise. So why are we protecting the shipping lanes for other countries (many years) for zero compensation,” President Trump questioned. “All of these countries should be protecting their own ships on what has always been a dangerous journey. We don’t even need to be there in that the U.S. has just become (by far) the largest producer of Energy anywhere in the world! The U.S. request for Iran is very simple – No Nuclear Weapons and No Further Sponsoring of Terror!” President Trump added.

Attacks on oil tankers and a U.S. drone have raised tensions around the strategic Strait of Hormuz

Earlier this month, two oil tankers, one owned by a Japanese firm and the other by a Norwegian company, were attacked in the Gulf of Oman, just outside the Strait of Hormuz, which connects the Persian Gulf with the Gulf of Oman and the open seas. The daily flows of oil through the Strait of Hormuz accounts for around 30% of all seaborne-traded crude oil and other liquids. While Iran vehemently denies involvement in the attacks on the two oil tankers, the U.S. is blaming the Islamic Republic of being behind the attacks. U.S. Secretary of State Mike Pompeo said last weekend that the Strait of Hormuz will remain open for all vessels.

Days later, Iran shot down a U.S. drone over the Strait of Hormuz, claiming it had violated Iran’s air space. The U.S. says that the drone was in international air space. The tension increased at the end of last week, sending oil prices surging. The U.S. had apparently prepared a response to the attacks with planned strikes on Iranian targets, before President Trump stopped a planned strike 10 minutes before the strikes, because, he said, they were “…not proportionate to shooting down an unmanned drone.”

Insurance costs for both tankers and their cargoes have surged

As a result, the cost of insuring Middle East oil shipments is soaring as tensions mount. So-called war risk premiums for a standard oil cargo from the Persian Gulf and the tanker hauling it can now cost upwards of $500,000, according to the insurance market. Earlier this year, the same premiums would have cost owners less than 1/10 of that. After President Trump’s Monday tweet, the vulnerability of maritime traffic to mounting tensions came into sharp focus, in the wake of six attacks on tankers since early May. The incidents, which American officials blamed on Iran, prompted an adviser to insurers to classify the entire Persian Gulf as a riskier area for shipping, giving underwriters scope to charge bigger premiums.

The insurance prices being lifted fall into two categories: one is for the vessels themselves, the other for their cargoes. While the cost of covering the tankers surged as soon as the most recent attacks happened, the surge in prices for the cargoes only happened over the past week. Underwriters are now aiming to charge anywhere from $150,000 to $325,000 to cover a cargo valued at $130 million. Until this week, the same cover cost was $1,000 or less. Insuring the tanker itself now costs in excess of $200,000, based on a $75 million vessel. That’s up from less than $30,000 at the start of 2019.

It’s not just the insurers, however, who’ve turned more wary about the Middle East. Ship owners themselves are raising rates to lift barrels from the region, despite signs that there are plenty of vessels that in theory are available to haul cargoes.