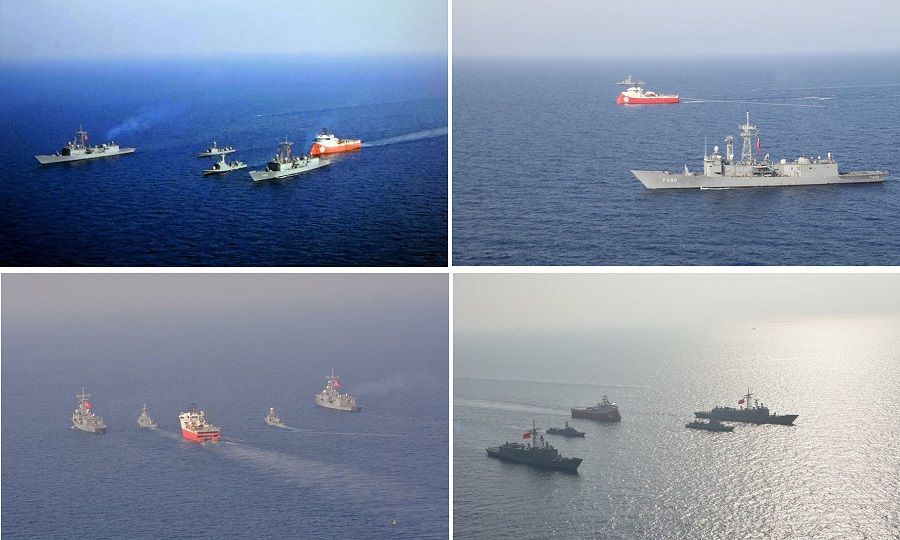 What are its real intentions. Will the major stakeholders react, or remain to verbal condemnations?

Turkish Foreign Minister Mevlut Cavusoglu on Friday said that the country’s natural gas exploration vessel Fatih has started “…drilling right in the west of Cyprus,” and added that Turkey is also sending a second ship to the area, because “…despite all our warnings for years, the Greek side started unilateral exploration around Cyprus, seismic exploration and now drilling operations. We will not back down and we will take all the necessary steps. The Greek Cypriots should know their limits.” Cavusoglu added that any Cypriot deal for oil and gas exploration in the Eastern Mediterranean that excludes Turkey is “invalid.”

Ankara is realizing that almost all Eastern Mediterranean countries, along with the U.S.A., are acting in coordination in support of Nicosia on the issue of its Exclusive Economic Zone (EEZ). In an apparent bid to entrench what it sees as its rights in the Eastern Mediterranean, Turkey has planned and executes an “energy invasion” with the drillship Fatih already in Cyprus’s EEZ, with three support vessels and a frigate, in the direction of a sea area 60 kilometers off the Western coastal city of Paphos within Cyprus’ continental shelf, as well as the Barbaros research vessel South of the city of Limassol. Turkish authorities have also indicated that a second drilling vessel the Yavuz, which is currently stationed in the Sea of Marmara, will be dispatched to the region in due course. According to Ankara’s statements will be ready to set sail to the area North of Cyprus in July in order to begin drilling activities.

A State Department spokesperson asked by hellasjournal.com stated: “As the spokesperson said in a May 6 statement, the United States is deeply concerned by Turkey’s announced intentions to begin offshore drilling operations in an area claimed by the Republic of Cyprus as its Exclusive Economic Zone”. This step, the spokesperson added, “…is highly provocative and risks raising tensions in the region. We continue to encourage all parties to act with restraint.”

Accordingly, meeting in Malta for the 6th South EU Summit the leaders of France, Italy, Malta, Portugal, Spain and Greece expressed their unreserved support for the Republic of Cyprus’ right to drill for gas in its Exclusive Economic Zone and called on Turkey to respect international law and the principles of good neighborly relations.

South East Med Energy & Defense presents the profiles of Turkey’s “Energy Armada” in order to better understand the true capabilities of these ships.

Fatih was built by Hyundai Heavy Industries in Ulsan, South Korea at a cost of nearly US$860 million, and launched on 25 November 2011. Initially named Deepsea Metro II, she was owned by Chloe Marine in Hamilton, Bermuda and was operated by Odfjell Drilling in Bergen, Norway, sailing under a Marshall Islands flag until 2018. In early 2012, she sailed to South Africa to undergo modifications at the DCD-Dorbyl Marine shipyard in Cape Town. From May 2012, she was active offshore Brazil for Petrobras until May 2015. The drillship was stacked on the Curacao island, Venezuela because no other orders were received for her service. In March 2016, she was sold to Chalfont Shipping Ltd. for US$210 million. End 2017, she was purchased by TPAO, a company of the Ministry of Energy and Natural Resources and renamed “Fatih”. After completing the preparation works, she was commissioned in May 2018 to carry out drilling work in the Mediterranean Sea.

The ship was designed by GustoMSC and built by the Hyundai Heavy Industries, Ulsan at Ulsan Shipyard Iin South Korea in July 2011, and christened Deepsea Metro I. Flagged Bermuda (2011-2018) and the Marshall Islands (2018-2019), the drillship was owned by Golden Close Maritime Corp., and operated by Odfjell Drilling. She served off Tanzania (2012-2014) and Kenya until the end of 2014, as well as off Vietnam (2015-2017) and Philippines (2017). In May 2017, she became idle and was warm stacked in Malaysia waiting for a new contract. She was purchased in October 2018 by the state-owned company TPAO at a price of US$262.5 million. She sailed off Port of Algeciras in Spain, and arrived in the Marmara Sea on 22 February 2019 for maintenance and renovation works off Yalova. She was renamed to “Yavuz” and is the second drillship of Turkey after “Fatih”.

The RV “Barbaros Hayreddin Pasa” is a Turkish seismographic research/survey vessel owned and operated by the Turkiye Petrolleri Anonim Ortaklığı (TPAO). She was named in honor of the renowned Ottoman Navy admiral Barbarossa Hayreddin Pasha (1478–1546).

The ship was built at Drydocks World Dubai for Polarcus, a Dubai-based marine geophysical company in the UAE. She was launched on 16 February 2011 joining the company’s same class fleet as the fourth vessel, and was christened “Polarcus Samur” for Arabic female given name meaning “swift, fleet”. She was delivered on 2 March 2011, commissioned under the flag of the Bahamas and sailed to its first mission to serve for Namibia in charter. The ship was acquired in December 2012 by the Turkish state-owned oil and gas company TPAO to an amount of US$130 million for use in marine seismographic surveys. The sale included a collaboration arrangement with Polarcus company for support service in seismic data acquisition, fast-track data processing, management and crewing for the vessel over a three-year period. After repainted in red and white at Desan Shipyard in Tuzla, Istanbul, reflagged and renamed to Barbaros Hayreddin Pasa, she was commissioned on 23 February 2013 by Prime Minister Recep Tayyip Erdogan.

While, Turkish Foreign Minister Mevlut Cavusoglu declared on Friday that Fatih has started “…drilling right in the west of Cyprus,” Cypriot diplomatic sources, on the other hand, believe that Nicosia’s decision last month to issue arrest warrants in response to the illegal presence of Turkey’s Fatih drillship in the Eastern Mediterranean island’s EEZ is paying off!

Under Cypriot law, the direct or indirect participation of any company in activities in Cyprus’ EEZ without Nicosia’s explicit consent constitutes a serious criminal offense, with penalties of over €1 million and/or five-year prison terms. The warrants were issued against companies, company executives and crew who are involved in the operations of the Fatih in the island’s EEZ without the explicit or implicit consent of the government of the Republic of Cyprus. Even though Turkish Foreign Minister Mevlut Cavusoglu has repeatedly brushed off the issue of the arrest warrants, the same sources say that they are now causing problems for foreign staff and companies working on the drillship. They say that the Turkish drillship had Norwegian staff that stopped working and replaced by Turks.

Meanwhile it remains unclear if the Fatih, which is located 36.6 nautical miles off the Akamas peninsula in western Cyprus, has actually begun drilling activities. Whether it is a fact or not, experienced observers have speculated, in the past, that the absence of specialist crews and the requisite technical capabilities onboard the Turkish drillship are an indication that no substantial results should be expected from Ankara’s exploratory activities. Nonetheless, if Turkey actually drills in Cyprus’ EEZ it accomplishes a de facto “right”. Bearing this in mind, Turkey’s moves are seen as a gradual effort to entrench its demands in the region and to test the resolve of parties with interests in Cyprus’ EEZ, such the United States, Israel, Egypt, Greece, France and Italy.