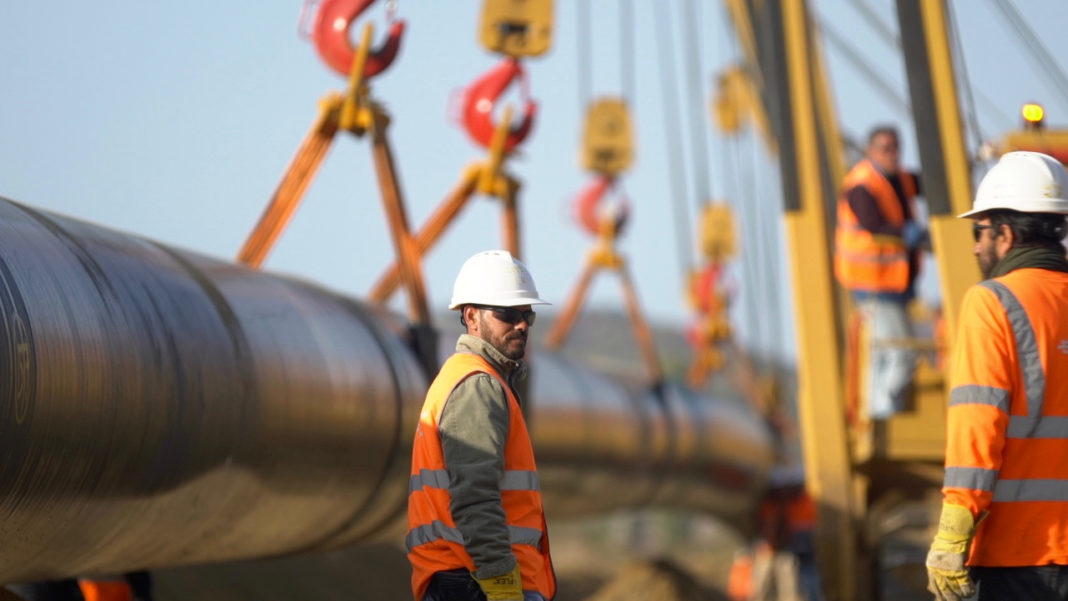 In September 2017, at the conference “1st Oil & Gas Forum” on energy issues held in Alexandroupolis, the American ambassador in his speech said that “…these initiatives in Northern Greece (TAP, Alexandroupolis FSRU and the IGB) as well as the upgrading of the Revythousa LNG terminal in the South, create the infrastructure for the introduction of new natural gas sources to Europe… and mitigate the influence of (traditional) suppliers (i.e. Russia)… I am proud to say that US suppliers of LPG, are entering the European market for the first time, and could constitute an important factor in promoting energy security”. In other words, the US ambassador clearly stated that the United States are in every way promoting the diversification of Europe’s energy supplies from Russia, and that they support every effort that, among other things, may also “bring” American natural gas to Europe.

The “official history” of the Alexandroupolis FSRU (Floating Storage Regasification Unit): begun in 2011, when Greece’s RAE (Regulatory Authority for Energy ) first expressed a positive opinion on the request by the Kopelouzos group (Gastrade), for a license to create a floating installation for the reception of liquefied natural gas, its subsequent regasification and its forwarding to the National Natural Gas System (NNGS), for distribution to consumers inside (mainly power plant operators) and outside Greece (Bulgaria). The supply to Bulgaria even then aimed to making her independent of Russian natural gas. It should be noted that the Kopelouzos group, via ENELCO, had already obtained two Permits for the construction of corresponding power plants of around 800 megawatts in the Alexandroupolis industrial area.

Several years have passed since 2011 and today the establishment of power plants in Alexandroupolis no longer presents any business interest. A large part of the electricity to be produced was destined for export to Turkey, which, due to its very high growth rates at the time, was “thirsting” for electricity. Since then, the energy sector in Turkey “has taken off” and managed to cover its needs, turning the country from a buyer to a vendor of electric power with Greece as the main customer.

At the same time, the launching and the upgrading of the Revythoussa LNG reception facility, which shall be operational in 2018, for the most part covers the Greek market’s needs for additional quantities of liquefied natural gas, in an effort to further make the Greek market independent from Russia. So, Bulgaria remains the main “player” for the absorption of the liquefied natural gas planned to arrive via the – planned – Alexandroupolis FSRU.

The interconnection with Bulgaria, with unwavering American support has taken, over the past years, an exceptional potential. Memoranda have already been signed between Bulgaria’s Bulgartransgaz, Hungary’s FGSZ, Romania’s Transgaz and Serbia’s National Natural Gas System operators for additional connections. The upgrading of existing connections from Bulgaria to Romania and Serbia and from Romania to Hungary have already been agreed. Naturally, all of the above have the “blessings” of the U.S. and always with the aim of gradually making energy in the Balkans (and not only) independent of Russia.

Consequently, the announcement at the end of February 2018 by GasLog, which owns 20% of Gastrade that the final investment decision for the Alexandroupolis LNG terminal would be postponed until the end of 2018, was not “out of the blue”. GasLog’s CEO Paul Wogan said that “we plan to begin the project in the second half of 2020 and we expect the final investment decision to be taken by the end of 2018”. The goal is for the decision initially and the project subsequently, to keep pace with the construction of the IGB, which according to the company is not progressing at the desired pace. At the same time, negotiations are under way for the Greek DEPA (Public Gas Corporation) and the Bulgarian BEH (Bulgarian Energy Holding) to participate in the investment scheme and the project.

A few days later at the end of February 2018 the ICGB (InterConnector Greece – Bulgaria) consortium CEO, Teodora Georgieva, said that 17 million Euros have been invested in the IGB interconnector pipeline project to date. She also pointed out that the project’s total estimated cost is 240 million Euros, excluding taxes, of which 220 million relate to capital expenditure. Regarding the crucial issue of funding, Georgieva said it would be covered through foreign borrowing and financing by the shareholders. So far, a 45 million Euro loan from the European Energy Program for Recovery (EEPR) has been approved and another 110 million Euros have been guaranteed by the Bulgarian state. The consortium has also applied for funding from the ESIF (European Structural and Investment Funds), which must be approved by the competent authorities of Greece and Bulgaria, as well as by the European Commission.

Therefore, although we are close to securing the financing for the IBG project, this has not yet been achieved. Dimitris Tzortzis, DEPA ‘s new CEO, speaking at the Delphi Forum in early March, described 2018 as “IGB’s year”, because as he explained the tendering process for the Owners’ Engineer and the supply of pipes is underway. He also said that the request for tenders for the EPC (Engineering Procurement & Construction) construction contract shall be published in the next few weeks, while at the same time the financial structure of the project and the regulatory framework are being finalised.

So 2018 is indeed “IGB’s year”. We would add that it is the “IGB’s and Alexandroupolis FSRU’s year”, and would express the hope that construction of the former begins so as to also drive the latter which will transform the sensitive region of Thrace into an energy hub oriented towards the north.

The project is designated as a national site and a site of national importance in both countries. It is envisaged that the power line will maintain a high voltage of 400 kV. The energy project is an element of the technical infrastructure, outside the boundaries of the urbanised territories and will be built in Bulgaria on the territories of the municipalities of Simeonovgrad, Haskovo, Harmanli, Kardzhali, Momchilgrad and Kirkovo.

The construction of the power line will contribute to the increase of the electricity transmission capacity of the energy system in the region as well as to the security of electricity exchange between the two countries.