Home Energy Articles SNAM SpA has been selected as “Preferred Investor” for the Greek DESFA... 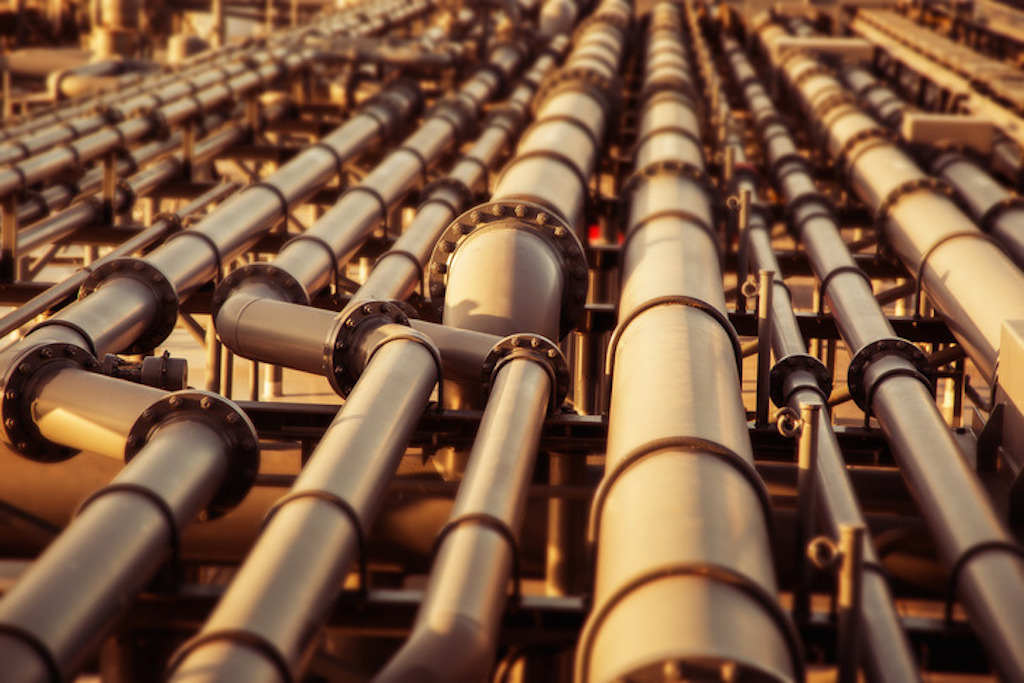 On April 16th the Greek Government chose the Consortium led by the Italian Company SNAM SpA as the “Preferred Investor” for the privatization of the 66% of DESFA SA. With an improved offer for a total of 535 m€, the Consortium will acquire DESFA shares from the Hellenic Republic Asset Development Fund SA (31%) and the remainder from Hellenic Petroleum SA (35%). Advisors in the operation where Lazard for SNAM, while the Greeks hired Alpha Bank and Alantra.

SNAM already holds a significant presence in Greece, being a 20% shareholder in the TAP pipeline, thus expanding its strategic role in the Greek NG market. The other Consortium’s members, where SNAM holds the 60% of shares, are the Spanish ENAGAS and the Belgian FLUXYS with a 20% of shares each. A further 300 m€ are expected to be invested by SNAM in Greece, within a DESFA development plan for more than 1,5 Bn€. The acquisition will be banking leveraged and a pool of Greek and international banks have been involved by the Consortium, to secure a non recourse financing package, according to SNAM’s press release of April 19th. The Greek Government retains the nomination of the DESFA Board President and a power of veto on domestic and overseas projects.

The privatization has received a positive feedback by the market, with analysts at Credit Suisse, Banca IMI and Kepler Chevreux underlining the possibility of synergies for SNAM with the South-North Corridor. SNAM’s plans have been discussed by the Greek PM Alexis Tsipras and its CEO during their meeting in Athens on April 28th. The operation has been commented by the Greek Energy Minister George Stathakis, who highlighted the importance of the agreement.

SNAM SpA is the Acronym for Società Nazionale Metanodotti (National Company for Gas Pipelines). It is an Italian company incorporated in 1941 in Milan (Italy) with the purpose of the construction and operation of pipelines and the distribution and sale of gas. In compliance with the Italian PM Decree of May 25th 2012, Snam exited from the orbit of ENI SpA, with the 30% of stocks (minus 1) being acquired by the Cassa Depositi e Prestiti (CDP SpA), the largest Italian investment bank (420 Bn€ assets managed in 2017), whose 83% of the share capital is owned by the Italian Ministry of Economy and Finance, the 16% is held by various banking foundations, while the remaining 1% is in treasury shares. 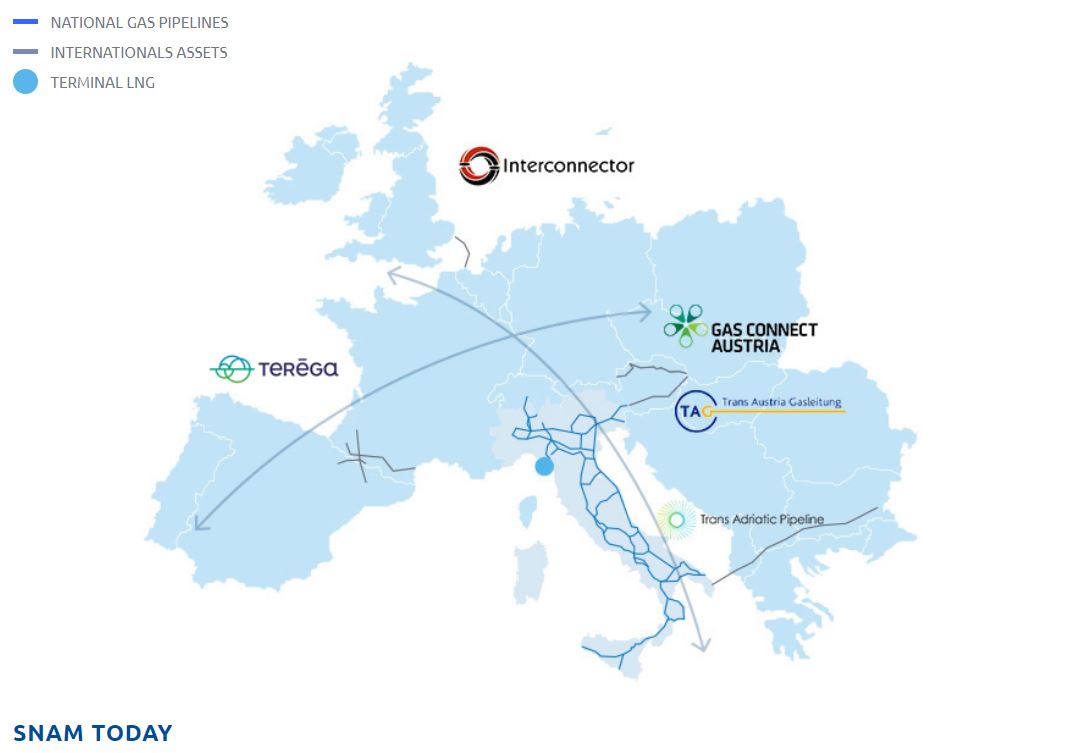 During it’s more than 75 years long history, SNAM has achieved a position of leader in Europe in the natural gas market. First in Europe by transport network size (over 32,500 km in Italy, about 40,000 Km with international subsidiaries) and Natural Gas storage capacity (16.7 bn c.m. in Italy and about 20 bn c.m. with international subsidiaries), SNAM manages the first liquefied natural gas (LNG) plant built in Italy and is a shareholder of the country’s main terminal. The company develops a comprehensive development strategy based upon its foreign subsidiaries in Austria (TAG and GCA), France (TIGF), the United Kingdom (Interconnector UK) and TAP in Greece and Albania.

SNAM is also the company most involved in projects for the creation of the Energy Union. It’s new development plan has been upgraded to a total of 5.2 Bn€ investments (from a previous total of 4,7 Bn€), focused on improving the Italian network and its connections with European infrastructures. FY2017 numbers are equally impressive with a declared 2.560 Bn€ Revenues, 1,336 Adjusted EBIT and Adjust Net Profits of 845 m€.

The acquisition of DESFA and future developments in Greece

Greek Natural Gas demand grew in 2016 of an impressive 21% YoY, signaling the need for more investments in infrastructures and contemporarily the possibility to increase the Greek strategic position and energy balance, by the implementation of existing and likely offshore reserves. The gas reserves estimated in the Herodotus fields South of Greece can thus become a factor of unprecedented economic and strategic growth for the country. Combining national profits with the hosting of a number of strategic infrastructures (rigs, pipelines, LNG stations), Greece could play a central role in the energy policy of the EU and especially of Italy. 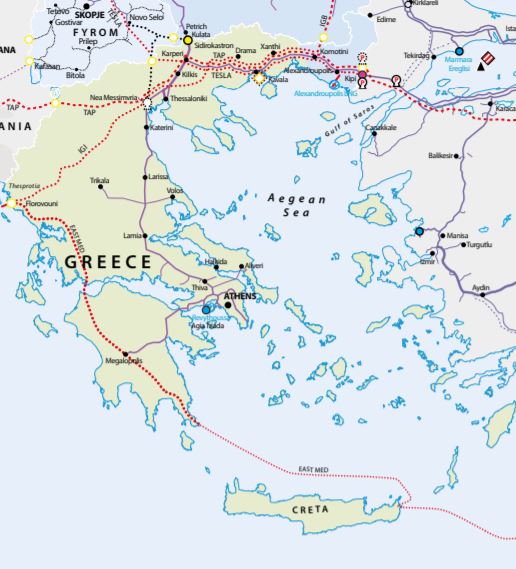 Due to the very strategic position of Greece and Italy, being primary cargo unloading points, there are many infrastructures to be enriched. The two countries could become also LNG Bunkering hubs, offering a low cost/low emission fuel refueling number of facilities (aground or aflot) for the ships on the route, from-to Europe and vice versa. The substitution of other marine fuels like heavy oil, marine diesel oil (MDO) and marine gas oil (MGO), would significantly contribute to the Greek and EU CO2 reduction targets. In all this, SNAM being a leading company in the development and promotion of LNG plants, Small Scale LNGs, Compressed Natural Gas (CNG) and Biomethane, plays a strategic role in the strengthening of the Greek energy efficiency and independency. The use of LNG and CNG will allow the widening of NG reach throughout Greece, also in those parts of the national territory currently not served by the main distribution network, including islands.

This will integrate perfectly the development plan of the Greek Gas Network, granting a full territorial coverage and the increase of CO2 reduction policies targets. CNG and LNG can also boost CO2 emissions reductions in mobility (GMobility). Also in this field, SNAM offers a particular expertise and know-how, through the specific agreement signed with ENI to create a network of LNG/CNG refueling stations along the Italian Highway network. It is worth to note SNAM’s commitment to Greece with the signature, on July 24th 2017, of a Memorandum of Understanding (MoU) with EDA THESS, one of the main gas infrastructure corporations in Greece. The MoU is aimed to develop opportunities in the distribution infrastructure managed by the Greek company, in view of the upcoming final phase of the market opening.

Greece’s importance to Italy and its energy security

Greece confirms its position as strategic and preferred location for major and infrastructural investments, including the energy, logistics, communications and food industries. Almost all the main Italian energy players have significantly invested in Greece, where also the major EPC contractors have a strong market position. Italy and Greece signed an agreement at Corfu in 2017, to strengthen the collaboration in the field of energy, of EU goals and to improve the reliability of supplies of hydrocarbons and power. Three main natural gas pipelines will pass through the Greek territory, the TAP (Trans Adriatic Pipeline), the ITGI (Interconnection Turkey-Greece-Italy) and the EastMed via Israel and Cyprus respectively, bringing natural gas to Italy. The capacity of the three pipelines together is estimated in 30 Bcm, that makes for up to the half of the Italian consumption. ITGI and EastMed will share the IGI Poseidon pipeline. 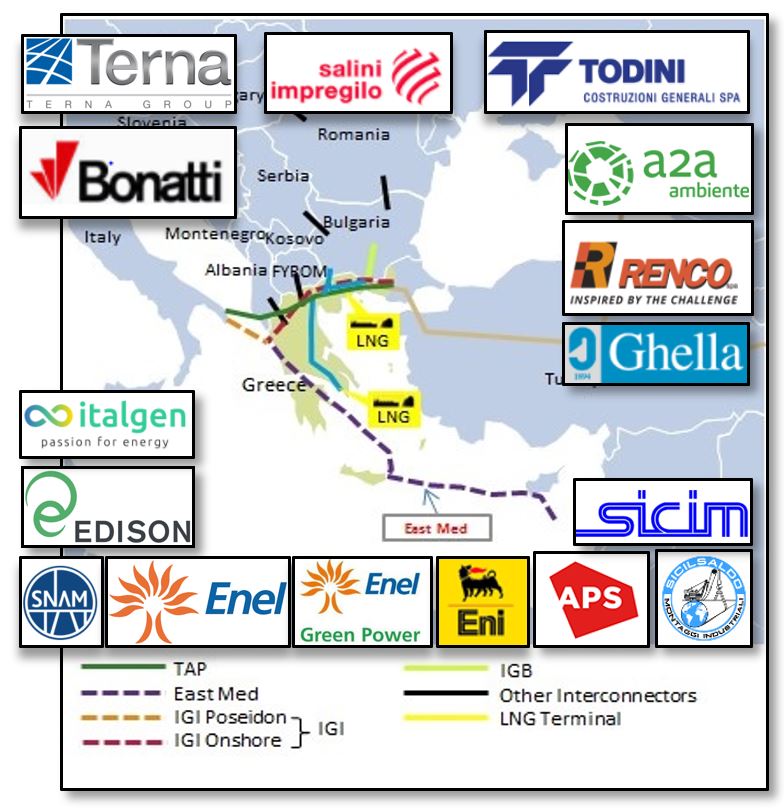 The importance of the Eastern basin will increase with ENI’s exploitation of onshore and offshore fields in Cyprus, Egypt and Lebanon, via LNG. To this purpose Italy is building and authorizing a number of regasification plants. One in Greece and others could be on the way in Cyprus, Israel and Egypt. One exploration area in the Gulf of Patra has been assigned to Edison SpA. The oil reserves in the whole area are estimated in 80 to 100 million barrels. There is, also, the interconnecting 500 MW 400 kV power line, the HDVC, which runs from Greece to Italy. The HDVC has been used to import to Italy up to 2,5 TWh per year, as a maximum balance, which equals to the 5% of the total Italian power. 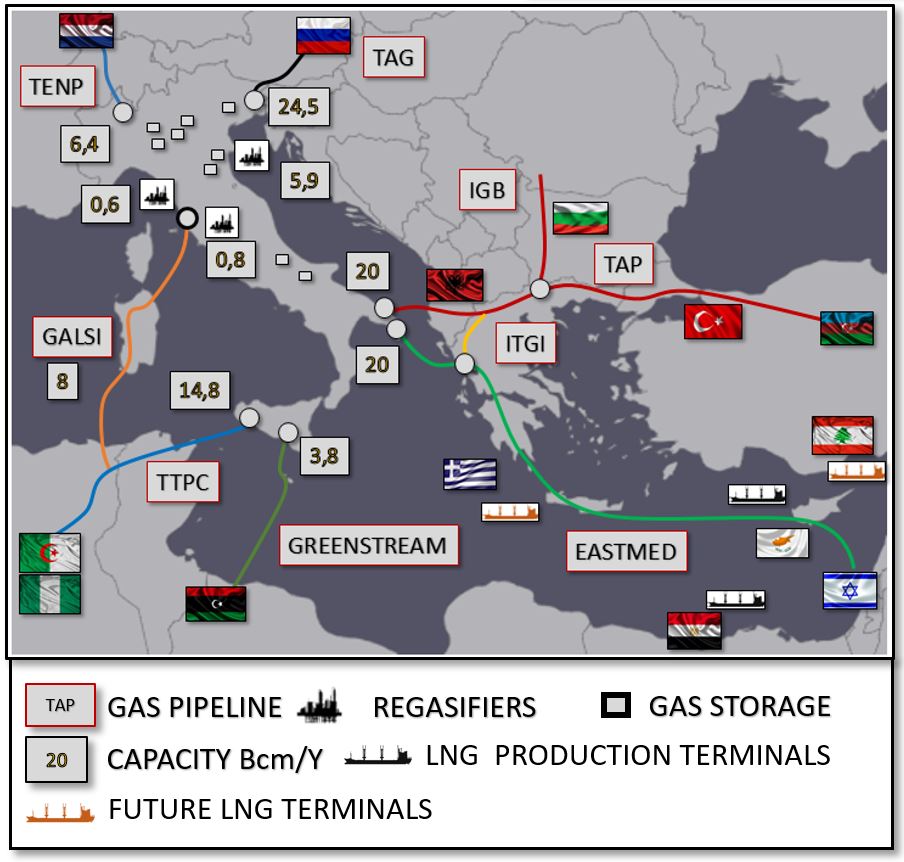 * Further oil & gas concessions with particular focus to the offshore reserves of Crete, and the Epirus Offshore and Inshore oil fields.

* New pipelines and power connectors to connect new concessions to the Italian mainland.

* More investments in the production of power, both from fossil or renewable energy sources. The Greek National Center for Renewable Energy estimates a total need of about 20 Bn€ in new investments needed by the Greek economy. 15 Bn€ of which destined to the Renewable Energy Industry and 7 Bn€ to the Fossil Energy Industry. A further 5 Bn€ are programmed for the reinforcement of the national power grid.

* Achieving economies of scale and scope with joint activities.