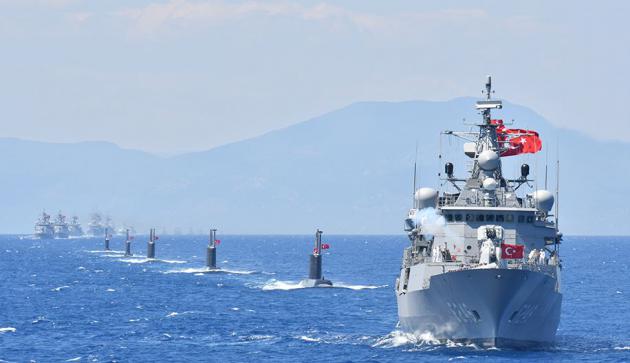 The “Blue Homeland 2019” exercise is held in the Eastern Mediterranean, Aegean and in the Black Sea simultaneously and is the largest naval exercise ever held in Turkey. It has been described by Turkish media as a “war rehearsal” which aims to send a clear message to Greece, Cyprus, Israel, and whoever else disputes Ankara’s declared interests in the Eastern Mediterranean. The exercise is coordinated by the Turkish Naval War Center Command and will last through March 8.

In many aspects, this is not a standard annual wargame played by the Turkish Naval Forces. There was one such major exercise the Turkish Navy had held in June 1998, Turkish naval elements spread over the Mediterranean. One group was deployed east of Malta and the other west of Crete, before launching a virtual battle with the participation of the Turkish air force. That was the largest exercise ever held by the Turkish navy in the Mediterranean and was meant as a response to the tension with Greece at that time.

When nations stage grandiose military games it is usually a kind of a signal. The Turkish media say the exercise is actually a message to the Eastern Mediterranean Gas Forum (EMGF), a coalition formed recently by Egypt, Israel, Cyprus, Greece, Italy, Jordan, and the Palestinian Authority. The alliance plans to explore energy sources in the Eastern Mediterranean Sea, including disputed areas. This show of force on the maritime domain will surely be closely watched by these nations.

Turkey views maintaining its presence as a regional player, with a role on the energy chessboard, as being of vital importance. It seeks a role not as an extra but as a real player that can gain the greatest possible benefits.

The fact that Cyprus’ EEZ attracts the huge interest of energy companies due to its significant deposits and the prospect of the construction of a LNG terminal on the island, increases Turkey’s aggressiveness and hostility in demanding a piece of the pie. Especially after yesterday’s announcements of Exxon Mobil’s that the size of the natural gas reservoir “Glaucus 1” ranges between 5 and 8 trillion cubic feet, which is the largest find in the Cyprus Exclusive Economic Zone so far.

The U.S., France, Israel, Italy, and Qatar are acting in Cyprus’ EEZ and new moves are being planned in the effort to settle the Cyprus problem. Visiting US Deputy Assistant Secretary of State Matthew Palmer has urged all sides interested in the goings-on in Cyprus’s exclusive economic zone (EEZ) to practice restraint and reiterated Washington’s support for United Nations-backed efforts for a solution on the island entailing a bizonal, bicommunal federation. Palmer said that the US hopes the development of the island’s natural reserves will provide incentives for a solution. Foreign diplomats – including US Ambassador to Athens Geoffrey Pyatt – have in the past expressed concerns over a prospective military “accident” due to the large concentration of firepower and heightened tensions in the region.

Ankara’s clearly stated objective is to co-administer with the Republic of Cyprus the latter’s huge hydrocarbons deposits and to control regional energy routes. The Greek side is convinced that Turkey’s aggressive actions in Cyprus’ EEZ and in the Aegean aim to establish de facto situations at the expense of the sovereign rights of both Cyprus and Greece. The Greek Foreign Ministry is closely monitoring the situation in the Aegean and the Eastern Mediterranean and the Hellenic Navy has been placed in a constant state of readiness to respond to any challenge from Ankara. Israel, the US, and France are all monitoring Ankara’s moves in the region as well.

For the sea, air, and land manouevres Ankara has issued a NAVTEX tying up areas of the Southeastern Aegean and the Southeastern Mediterranean, including the continental shelf of the Greek island of Kastelorizo, the area southeast of Rhodes, and the EEZ of the Republic of Cyprus, a total area of 462,000-square metres.

The Turkish daily “Yeni Safak” reported that the exercise is a means for “…Turkey’s armed forces to bolster their sovereignty over 462 square kilometres of sea and will send a clear warning for those who are preparing maps for invasion”. Turkey’s state-run Anadolu agency reported that a total of 103 vessels are taking part in the drill. The flotilla includes 13 frigates, 6 corvettes, 16 assault boats, 7 submarines, 7 mine hunting vessels, 14 patrol boats, as well as other navy vessels. Anadolu described the exercise as a huge “show of force” because aside from over 100 ships, also participating will be SAT and SAS commando units, land forces and the Turkish Coast Guard.

It is reported that more than 80% of all corvettes, fast attack craft, and patrol boats, currently not deployed to a mission are taking part in this exercise. Turkish media report also that an impressive 93% of all frigates have sailed away. Whether these claims are true remains to be seen. To keep so many ships for 10 days at sea requires a good and strong logistical support. The test of the logistical support Turkey can provide to its deployed forces, is one of the important issues of this exercise.

So what makes this exercise novel

The most important part of the exercise will be the port visits made by the Turkish warships. Between 6th and 8th March, 40 ports will be visited by 67 participating naval units, 7 of which are foreign ports. Turkish warships will visit, Bulgaria, Romania, Ukraine, Russian Federation, Georgia and the Turkish Republic of Northern Cyprus. The simultaneous visits to the Black Sea riparian states have a high symbolic value. Foreign Ministries are not the only ones to shape external policy. Any port call is a diplomatic mission, providing an opportunity for official meetings and public diplomacy, with the events covered by media. Naval visits reflect foreign policy trends. For the present, Turkey seems to be the only nation that can perform such a diplomatic show of force. It is not a small event to do port visits in 5 different nations at the same time.

In conclusion, this exercise is a military drill to turn the concepts of Turkish Armed Forces into doctrines. This exercise is a political act to show that Turkey will protect its interests on the high seas.

What is the real strength of the Turkish Navy today*

Deliveries over the past decade have included:

Under construction today are:

*see our Report #3: “ENERGY WARS: The security of the Energy Routes in the South East Mediterranean”