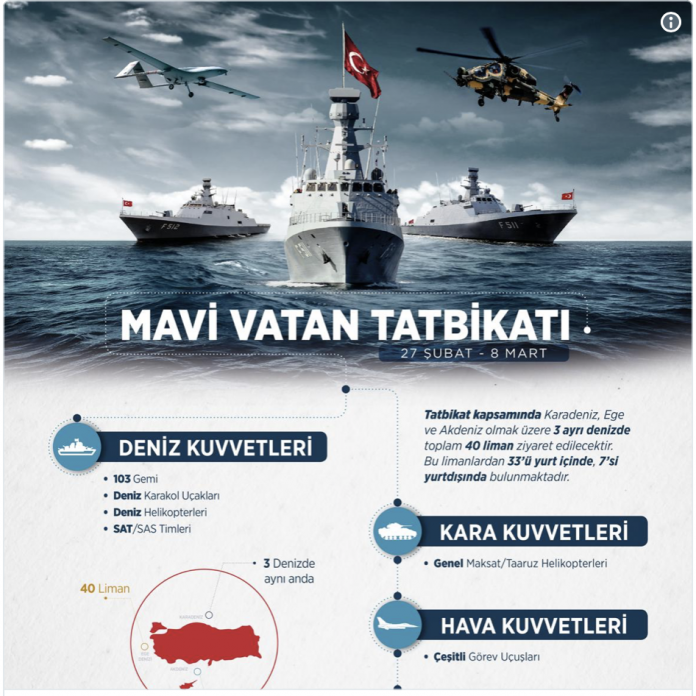 An update to the major units taking part in the exercise

Following our previous article about the Turkish Aeronaval Exercise, here is an update to the major naval units taking part in it. Due to the fact that most of the attention is focused on larger units like frigates and corvettes, the smaller landing craft and the auxiliaries taking part are not included:

Frigates: TCG Gökçeada is deployed with the SNMG-2 and TCG Geliblou is in Gulf Of Aden with CTF-151. One frigate is escorting the Barbaros Hayrettin seismic ship in the Mediterranean. This means all frigates of the Turkish Navy are deployed.

Corvettes: Two corvettes are also escorting the Barbaros Hayrettin seismic ship in the Mediterranean.  This leaves 8 corvettes available for this exercise. Only one will miss it out.

Minehunters: TCG Akçakoca is deployed with SNMCMG-2. From the available ten strong force, 7 will take part.

Submarines: they are the most difficult units to identify. TCG Gür is in Italy to join the NATO exercise Dynamic Manta. Two more are deployed to the Eastern Mediterranean according to Turkish General Staff. 7 out of 9 available submarines are taking part.

Amphibious ships: According to pre-exercise briefing 22 amphibious ships are participating in this exercise. Most of them are smaller LCT and LCM sized landing craft.