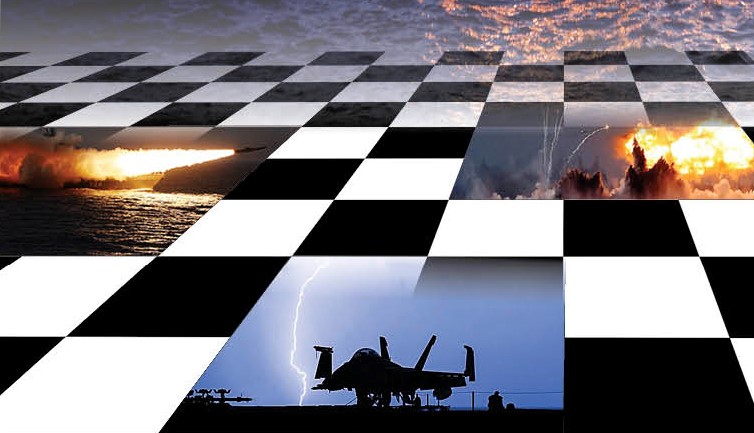 It was the 20th of previous March when the 6th Trilateral Summit “3+1” at Jerusalem was concluded with the following statement: “Secretary Pompeo underlined U.S. support for the trilateral mechanism established by Israel, Greece and Cyprus, noting the importance of increased cooperation; to support energy independence and security; and to defend against external malign influences in the Eastern Mediterranean and the broader Middle East,” affirming “…their shared commitment to promoting peace, stability, security and prosperity in the Eastern Mediterranean region.” This resolution raised hopes high about the prospects of establishing a safe and prosperous environment for the exploitation and export of regional hydrocarbons’ sources, especially those of Israel’s and Egypt’s, to the “energy thirsty” Europe.

Since then, a lot of water has flowed under the bridge:

Amid the above context, the Energy ministers of Greece Costis Hatzidakis, Cyprus Yiorgos Lakkotrypis, Israel Yuval Steinitz, together with Assistant Secretary of State at the State Department’s Bureau of Energy Resources Francis R. Fannon, will meet in Athens tommorow, for the 1st Ministerial Energy Conferrence, which seems as a continuation of previous trilateral summits between these countries, albeit in a slightly lower level, in an effort to institutionalize the 3+1 meetings.

Among various expert level discussions, the Conferrence will probably review the current status of the EastMed gas pipeline, a project which its importance ranks high with all the stakeholders for Europe’s energy security, and try to overcome the current delay due to the pending signing of the intergovernmental pipeline agreement between Greece, Cyprus, Israel and Italy.

The EastMed project may progress only if it can provide gas to Europe at prices that can compete with existing gas prices. This is where the challenge lies. However, LNG from Egypt’s existing plants at Idku and Damietta may be exported to Europe, because very low liquefaction costs make it commercially viable, without the consent or the cooperation of Turkey, in comparisson to other potential gas exports from the region which cannot benefit from these advantages.

For the time being, however important and useful may these Trilaterals be, they have proved useful, mainly, in terms of regional politics but vague and lacking on practicalities, especially given the region’s burning problems in need of urgent resolution. They will certainly help improve cooperation among its members, but they will not have a direct effect on the development and export of hydrocarbons from the region, which is still subject to the commercial challenges of global markets and the effects of the global shift to clean energy.

Washington is strongly committed to the “3+1”. Important new developments, both geopolitical and practical, led to its renewed focus on energy development and security in the Eastern Mediterranean. The U.S. has been very supportive due to its desire to counteract Russian gas to Europe, aiming to have American gas to Europe as well as other sources of gas, including East Mediterranean gas.

At a strategic level, the proposed EastMed pipeline is an extremely important project that the United States strongly supports. It complements everything that it has been doing with the “3+1” meetings supporting the flourishing Greece-Israel-Cyprus relationship. Apart from energy, however, the U.S. is also interested in other issues in the region, such as the fight against terrorism, drugs, trafficking in human beings and immigration.

The “Eastern Mediterranean Security and Energy Partnership Act of 2019”, introduced by Senators Bob Menendez and Marco Rubio, will allow the U.S. to fully support the trilateral partnership of Israel, Greece, and Cyprus through energy and defense cooperation initiatives. The bipartisan legislation also seeks to update U.S. strategy in recognition of consequential changes in the Eastern Mediterranean, including the recent discovery of large natural gas fields, and a deterioration of Turkey’s relationship with the United States and its regional partners. It also requires the Administration to submit to Congress a strategy on enhanced security and energy cooperation with countries in the Eastern Mediterranean, as well as reports on malign activities by Russia and other countries in the region. This legislation, that essentially upgrades the geopolitical roles of Greece and Cyprus, is seen in Athens as a reflection of Washington’s renewed interest and growing involvement in the region. Considering the high priority given to the region, the Act also suggests that the trilateral alliance between Greece, Israel and Cyprus could serve as vehicle for the new dynamic in the region.

At the previous Jerusalem’s Trilateral Summit Prime Minister Netanyahu said that it is one of the best regional associations in the world. “We plan to create the EastMed pipeline from Israel, Cyprus, to Europe, which will provide stability in the region, prosperity for our peoples and provide alternative energy sources for Europe.The presence of the U.S. Secretary of State is important and shows that the U.S. supports this regional effort… in this partnership we would welcome not only the U.S. but also other countries,” he added.

Israel, the first country of the region to make major gas discoveries, was also the first mover in the economic and political game for its monetization, in terms of new export routes and infrastructure projects. In the following years, the Israeli, Cypriot and Greek energy ministers created joint task forces to evaluate the feasibility of several options. For exportation, they are considering the EastMed Gas Pipeline to carry gas from Israel and Cyprus to European markets through Greece, and a joint Israeli-Cypriot LNG plant near Vassilikos on the southern coast of the island. However, other projects are simultaneously being evaluated by each government according to its own energy-security agenda and national interests.

For Israel, the U.S. and Cyprus, as well as Greece, the EastMed does not represent a simple gas supply pipeline, but a comprehensive strategic plan involving capital and other means, as well as the creation of security conditions in the region. The strong ties between Athens, Jerusalem, and Nicosia go well beyond the promotion of open communication links in the field of energy.

However, aside from the significant talks of the forthecoming Conferrence, mr. Netanyahu government’s main concern is the decisive September 17th re-election contest, as the prime minister is embroiled in a corruption investigation and facing allegations of bribery, fraud and breach of trust. In addition, Israel’s primary concern in the region is the U.S.-Iran confrontation and the possibility of esacallation of the crisis in the Strait of Hormuz.

Greece: Aspiring to be an energy hub for the Balkans and Europe

Greece has significant potential prospects in its ultra-deep waters and aspires to become an energy hub (gas and electricity) towards Italy and the Balkans, while also diversifying its own sources of supply. As a member of two Trilaterals with Cyprus, Israel, Egypt as well as the recently formed East Med Gas Forum (EMGF), Greece believes that natural gas plays a strategic role in the low-carbon energy transition of its economy. The Greek government supports the liberalisation and strengthening of the Greek natural gas market, aiming to connect it with the markets of the Balkans, Europe and East Mediterranean through major infrastructure projects, whether it’s through TAP pipeline, or Revithoussa, or IGB pipeline, or the FSRU (Floating Storage Regasification Unit) at Alexandroupoli.

On the other hand, Greece lives in a complicated neighborhood in terms of the East Med. One may see that in the, the very successful Greece-Israel-Cyprus Trilateral, as well as the Trilateral of Greece-Egypt-Cyprus. The big geopolitical game in the Eastern Mediterranean over the region’s energy resources is on, and Greece obviously cannot shrink away from all that. It needs to protect its own vital interests and at the same time project its influence in the wider region, especially vis-a-vis Turkey and its increasing aggressiveness.

Cyprus: Too rich in energy sources, too weak to defend them

Energy Minister Yiorgos Lakkotrypis recently announced that Cyprus is planning to carry out eight drillings in its EEZ, during the next 24 months. The Minister said that six of those will be exploratory, while two will be confirmatory. Following this announcement, Nicosia granted approval to the energy companies ENI and Total to explore Block 7 of Cyprus’ EEZ. It is worth mentioning that their joint drilling projects include Block 3 of Cyprus’ EEZ, where in February 2018 Turkish warships prevented an ENI drillship from carrying out a drill.

In order to secure its energy plans, Cyprus participates in two tripartite treaties: The Israel-Cyprus-Greece and the Egypt-Cyprus-Greece Trilaterals, and participates to the East Mediterranean Gas Forum. The expansion of the trilateral cooperation of Cyprus, Greece and Egypt with other states in the region was agreed during a recent meeting held in Nicosia between the Ministers of Foreign Affairs of Cyprus and Egypt, Nikos Christodoulides and Sameh Shoukry, as well as the next trilateral Summit in Egypt, towards the end of the year, at the level of the Heads of State of the three states .

Additionaly, the political decision to participate in the construction of the proposed EastMed pipeline confirms the significance of this project, which beyond its main energy nature also possesses a clear geopolitical and geostrategic one. It may even take on the guise of a security subsystem that will alter not only the military, but also the energy and economy balances between Cyprus, Greece and the EU, on the one hand, in comparisson to those between the EU and Turkey, on the other.

Nevertheless, up to date these “alliances” seem that they cannot help with problems, such as Turkey’s recent “energy invasion” in Cypru’s EEZ. The EU and US might have been able to use their influence, but pressure and sanctions so far have not had any impact. It anything, it would appear that they have lessened their ability to influence Turkey, which no longer sees the EU as an independent arbiter, or the U.S. as a strategic ally.

Turkey’s role in the East Med

During the recent meeting chaired by President Recep Tayyip Erdogan late Tuesday, the country’s National Security Council affirmed Ankara’s intention to protect the rights and interests of Turkish and Turkish-Cypriot citizens in the Eastern Mediterranean under what it said are the provisions of international law. The Eastern Mediterranean is “an issue” for 82 million Turks. “It is an issue of the homeland, an issue for Turkey, a struggle against those who are bothered by the existence of Turkey,” Turkey’s Energy Minister Fatih Donmez added, declaring that the country will not back down in its demands.

Turkey’s plan to extend its activities in the Eastern Mediterranean stem from its increasing energy needs, in particular for natural gas, where demand is estimated at 52 b.c.m. per year. At the moment, Ankara is heavily dependent on Russia and Iran, importing 55-60% of its natural gas from the former and 20% from the latter. As a result, it has for some time now turned its sights on the Eastern Mediterranean, making its claims to natural energy reserves in the region, part of its long-term strategy. The Turkish Petroleum Corporation (TPAO) has extensive and long-term plans in the Eastern Mediterranean that do not only include Cyprus’ EEZ, but also areas on the edge of the Greek continental shelf.

To Ankara, the Trilateral Summits are part of what it believes to be a concerted effort to encircle Turkey, leaving it outside of the energy developments in the region. Ankara is realizing, also, that almost all Eastern Mediterranean countries, along with the U.S.A., are acting in coordination in support of Nicosia on the issue of its Exclusive Economic Zone. In an apparent bid to entrench what it sees as its rights in the Eastern Mediterranean, Turkey has planned and executes the “energy invasion” with “Fatih” and “Yavuz” drillships, East and West of the island, the “Barbaross” research vessel at the South and the imminent arrival of another surveyor vessel, the “Oruc Reis”, in the broader area between Greece’s and Cyprus’s EEZs. Turkey’s moves are seen as a gradual effort to entrench its demands in the region and to test the resolve of parties with interests in Cyprus’ EEZ, such the United States, Israel, Egypt, Greece, France and Italy.