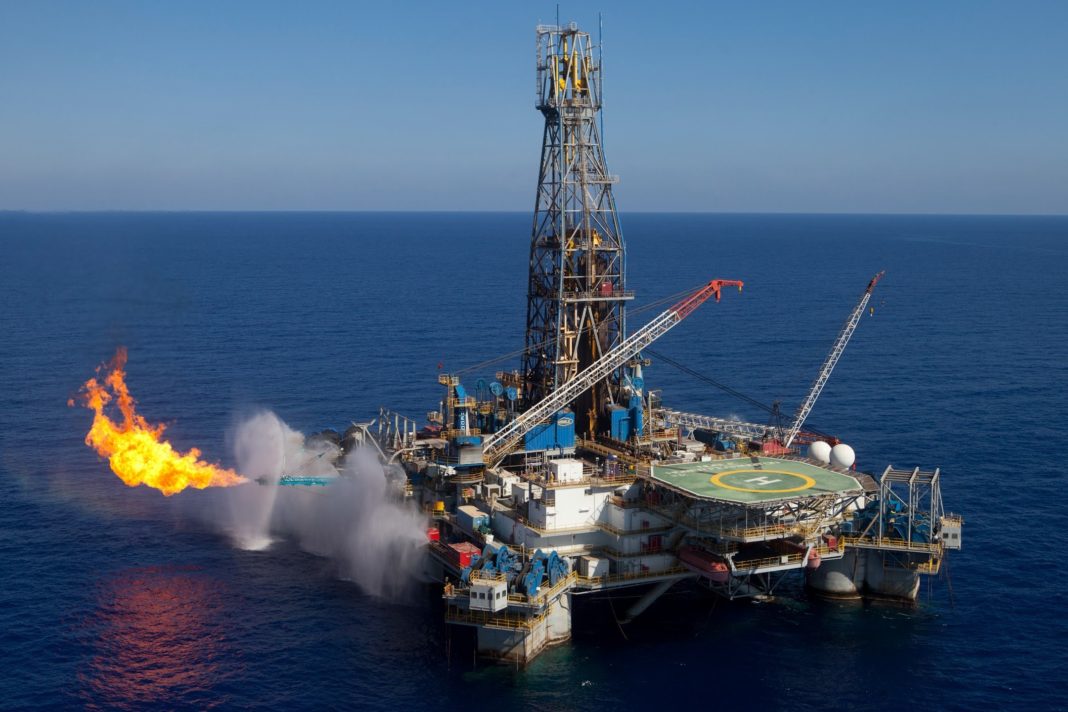 Interview with Harris A. Samaras, Chairman and CEO of Pytheas, an International Investment Banking Organization*

Ever since the discovery of Tamar of 10 trillion cm gas capacity, in January 2009, the Leviathan Reserve in December 2010, of a 22 trillion cm capacity of natural gas within the Israeli EEZ and of Aphrodite within the Cypriot EEZ in December 2011, with stocks of 4.2 trillion cm of natural gas, the East Mediterranean region acquired new interest. The discovery of the Zohr Reserve in Egypt, in December 2016, provided totally new data about the “capabilities” of the wider region. 2019 is expected to be a milestone year after the production and commercial exploitation of all these reserves begins.

Mr. Harris A. Samaras, Economist and Chairman & CEO of Pytheas, an international investment banking organization, in his interview describes the opportunities for E.U. which, only within a few years, could partially but significantly relieve its energy dependency to Russia and Turkey. As it also could in the medium to longer term succeed its complete energy independence. He, also, stresses the significance of T.A.P. to the energy security of Greece, the Balkans and eventually Europe as well. Finally, he poses some eloquent questions about the “lukewarm”, as he says response to the region’s bully, Turkey…

What does the Trans Adriatic Pipeline (TAP) project mean for Greece and the Balkans? What does it mean for Europe?

Any form of additional supply of a competitive energy source that increases diversity and minimizes dependence is a plus. Not only for Greece and the Balkans, but also for the rest of Europe. More of particular significance is for European energy security.

The TAP brings new gas through a new route which is unquestionably a good thing. Greece has contracted a not bad 1 bcm/y (corresponding to about 20% of its current demand). A €1.5 billion much needed foreign direct investment and the only pipeline option that runs through Greece. The 10 bcm/y export capacity of the TAP is indeed a positive energy requirement development for the Balkans, it fills some of the void, however, for the overall needs of the region it is somewhat negligible. I could probably better characterize it as complimentary. We also need to understand that other than the 1 bcm/y that is contracted by Greece, 8 bcm/y are secured by Italy. The remaining 1 bcm/y by Bulgaria. It is acknowledged that the Pipeline is designed with Physical Reverse Flow allowing gas from say Italy, to be diverted elsewhere.

There are of course additional advantages, such are job creations, related economic development and so forth. Also, if and when the capacity is doubled (by installing two additional compressor stations) there are interconnectivity options, provided that gas in the wider Caspian region is increased. One needs to look though at the bigger picture and how the energy landscape is shaped.

The source for TAP is from the Azeri Second Shaz Deniz field in the Caspian Sea, via the South Caucasus Pipeline Expansion (SCPX), through Georgia to Turkey via the Trans Anatolian Pipeline (TANAP), through Greece and Albania, across the Adriatic Sea to Italy. While the EU is even more gas dependent on Russia (Gazprom has delivered 193.9 bcm in 2017, 8% higher than 2016), the Arab “Spring”, the war in Syria, the Russia-Ukraine conflict and ISIS, made things even more complex. In essence, gas supply security has decreased, while import dependence increased in areas of high political risk or high transit risk.

It is important to additionally take into consideration that Brussels blocked South Stream and has been resisting other projects such as Nord Stream 2. And then there is TurkStream, Russian gas to Turkey and then possibly to Southeast and South Europe and beyond. Easy to deduct from facts and the tangible relevant developments, that Greece, the Balkans and Europe remain energy dependent on one hand to Russia and will on the other be soon dependent to Turkey. A “hostage” situation that I am afraid does not contribute to EU Energy Security!

But does Greece, the Balkans and subsequently Europe have any other alternatives?

They certainly do. To be more precise the EU does. Oddly, however, the EU seems to voluntarily turn a blind eye to a tangible solution, which to my point of view could only within a few years partially but significantly relieve EU energy dependency to Russia and Turkey. As it also could in the medium to longer term allow Europe to be completely energy independent. But before I elaborate, I will need to briefly address the concern about Turkey by making a few statements or rather raising a few questions: Does anyone in a right state of mind truly believe that any pipe route via Turkey could ever promote EU stability and EU energy security? Isn’t it more than likely that Europe will become a hostage to a country (Turkey) that is itself unstable and a bully towards both the EU and all its neighbours? Could those that deliberately push for such routes (via Turkey), at current geopolitical conditions, considered to be anything else but enemies of Europe? Think about it.

Now, last February, according to ENI’s CEO, Claudio Descalzi, the discovery of Cyprus’ Calypso gas field could be bigger than Egypt’s Zohr. “At a minimum”, he stated, “the field will be a Zohr tie-in, with a stand-alone Cyprus LNG project a real possibility”. Egypt’s Zohr gas reserve (gross mean resources) is 850 bcm.

But what happened? Turkey, last February, sent over its “mighty” navy and forbade ENI’s vessels to proceed with additionally drilling. All in the internationally recognized Exclusive Economic Zone (EEZ) of Cyprus – note that, the development of oil and gas resources in the Cypriot EEZ abide to the UN Convention of the Law of the Sea (UNCLOS) which Cyprus ratified in 1988. So, ENI’s vessels withdrew.

What more happened? The European Commission, with a rather late and “lukewarm” reply, asked from Turkey to, “respect the sovereignty of all EU member-states and refrain from any actions that might damage good neighbourly relations”. A couple of weeks later, early March, the EU “suggested” to Cyprus that it should not exercise a veto against an additional €3 billion funding (for Syrian refugees) to Turkey. Late March at a meeting held in Varna, Bulgaria with Turkey, the EU in an ingratiating manner asked Turkey to behave… At the same time and within the last few months, certain EU-member countries, signed contracts of hundreds of millions Euro to sell weaponry and other related to Turkey. Why such a reaction by the EU? I leave it to your readers to draw their own conclusions… 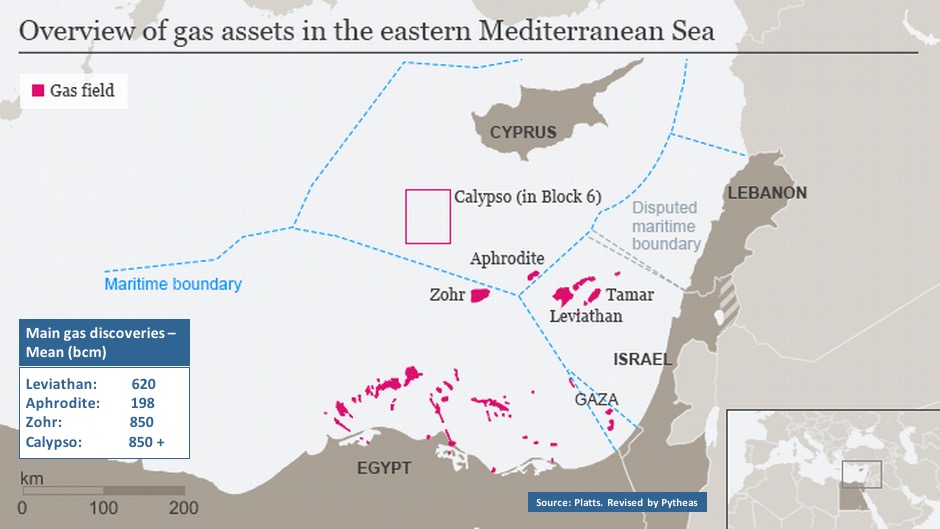 Another Cyprus gas field, the Aphrodite, has a gross mean average of 198.2 bcm of natural gas. Furthermore, ExxonMobil along with Qatar Petroleum, are currently performing additional survey while they are planning exploration drilling in Block 10 in October of this year South of the Calypso gas field. Additionally, and while Israel’s Leviathan gas field has a mean of 620 bcm, last December, Israel, Cyprus, Greece and Italy, signed a provisional agreement to jointly develop a pipeline project, The East Med Pipeline, with an aim for completion by 2025.

Egypt and Cyprus maintain strong ties in the field of energy since 2009, with an aim to use Cyprus as a bridge for exports to Europe. Tripartite summits in 2014, 2015 and 2017, between Cyprus, Egypt and Greece were focussed on the development and exploitation of the hydrocarbon reserves that lie in the Eastern and South-eastern Mediterranean. Moreover, without excluding Lebanon’s gas reservoir prospects – the U.S. Geological Survey estimates that the Levantine Basin could hold more than 9,600 bcm – Greece’s hydrocarbon potential should not be ignored. On the contrary! While Greece’s exploration seems to finally be under way, scientific estimates especially south of the island of Crete  indicate gas reservoirs that may be even larger than those in the Levantine Basin.

Consequently, the EU does have other alternatives. First, however, it has to stop turning a blind eye to Turkey’s illegal and hostile actions and has to react tangibly and promptly. Cyprus’ hydrocarbon discoveries – Cyprus is an EU member state – provide for the EU an immense energy opportunity. The EU has to realize and act accordingly that the hydrocarbons discovered in Cyprus (the significant discoveries) are not just a Cyprus issue. The hydrocarbons that are scientifically estimated to exist in Greece are not just a Greek issue. They are issues of primary importance for the whole of the European Union. An East Med Energy Corridor, that would avoid non-EU countries, would guarantee an uninterrupted energy supply source for the EU, of the EU!

And let’s not exclude Israel from this equation; a proven ally with significant hydrocarbon discoveries, that is geopolitically stranded and surrounded by hostile to Israel nations. or Egypt to say the least.

But why would the EU behave in such a manner against the interests of an EU-member state and subsequently to EU itself?

This is a question that you should direct to the EU Commission.

*About Harris A. Samaras

An Economist and presently the Chairman & CEO of Pytheas, an international investment banking organization, Mr. Samaras has also worked with the Bank of America Group, Thomson Financial BankWatch, and Moody’s Investors Service. His research and extensive publications in these areas, range across practice rather than theory, economic and business thought, entrepreneurship and geopolitics.