Home Defence Greece and U.S.A. are getting closer due to Turkey’s anti-West posture 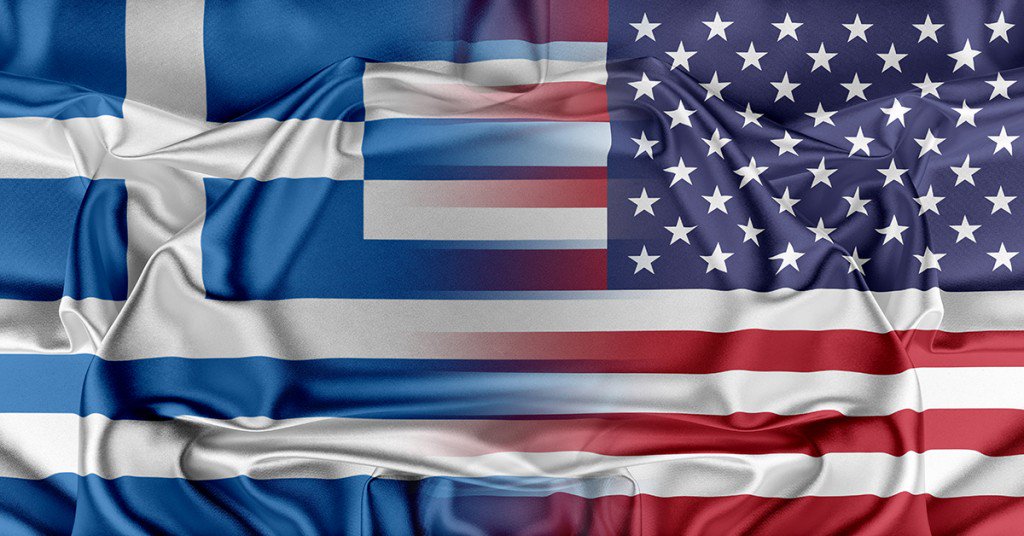 The recent meetings of Greece’s HDGS and Foreign Minister with their U.S. counterparts in Washington, set the basis for the upgrade of its strategic role in the region and the deepening of the two countries cooperation.

During his visit to the United States Admiral Evangelos Apostolakis presented Greece’s concerns about Ankara’s aspirations and discussed the procurement of military equipment.

Ankara’s provocative behaviour in the Aegean Sea and the Eastern Mediterranean, coupled with its over-equipment, where aircraft, anti-missile systems and submarines are concerned, makes it imperative for Athens to seek every possibility of procuring military equipment from the United States at a time when US-Turkish relations are going through one of their worst periods. According to information, the chief of the Hellenic National Defence General Staff, Admiral Evangelos Apostolakis, during his recent visit to Washington D.C. had long and in-depth talks on the deepening of Hellenic-American defence cooperation. Apart from analyzing current developments in the region, the HNDGS Chief discussed three main issues during his US meetings: firstly, the potential transfer of two Arleigh Burke-class destroyers, secondly, the supply of MQ-1 Predator unmanned aerial vehicles (drones) and thirdly, the possibility of Greece’s participating in the Freedom Class littoral combat ship construction programme.

Contacts and exchange of views

Indicative, however, of the close relationship that has developed between Athens and Washington in the defense sector was Admiral Apostolakis’ meeting with the US Secretary of Defence James Mattis. The Pentagon’s Chief is considered by many to be the “calm power” in the Trump administration. The meeting of the two men lasted more than an hour, and during this the discussion concerned all the developments from the Balkans to the Eastern Mediterranean. A large part of the discussion was devoted to Turkey, a country that is very much on the mind of the US military establishment, which is deeply concerned not only about the Ankara-Moscow approach, but also about the type of Turkish-Iranian relations and Turkey’s role in the Middle East.

Both in his meeting with Secretary Mattis and with his counterpart, General Joseph Dunford, as well as the Deputy Assistant Secretary of Defense for European and NATO Policy, Thomas Goffus, the Deputy Assistant Secretary for European and Eurasian Affairs, Jonathan Cohen (the two men were recently in Athens, participating in the talks of the bilateral High Level Advisory Committee), and the Acting Assistant Secretary of State for Political-Military Affairs, Tina Kaidanow (who has been following Greek and Turkish affairs for many years), the Greek HNDGS Chief presented a detailed analysis of Turkish practices in the region, emphasizing the concern caused by the possible simultaneous procurement by Ankara of F-35 fifth generation aircraft and the Russian S-400 anti-missile system.

Similar talks were held with Admiral James Fogo, commander Allied Joint Force Command Naples, Italy, and US Naval Forces Europe and Africa. In Congress, however, the debate is heating up over a possible “freeze” of the F-35’s delivery if Ankara goes ahead with procurement of the S-400. According to Turkish sources, the hand-over ceremony of the first F-35 to the Turkish Air Force will take place next June with their delivery scheduled between June and November 2019. So until then much can still happen…

Payment facilities for the F-16 upgrade

During the meetings the Greek side clearly stated its desire to acquire surplus US defence equipment, even more so since Greece’s financial capabilities are not unlimited. The signing of the Letter of Offer and Acceptance for the upgrading of 85 Hellenic Air Force F-16s, a few days before the HNDGS Chief ‘s visit to the US capital, was a sign that Athens means what it says about the deepening of co-operation. The two sides managed to find a way to accommodate the Greek demand for a more favourable mode of payment during the three-year period of 2019-2021, during which rigid commitments to fiscal surpluses of 3.5% of the GDP, as part of the adjustment program, leave no room for flexibility. The solution was found via a regulation that essentially allows Greece to not make large payments in advance, but in a way make payments upon receipt.

Discussions on upgrading the Greek fleet

Admiral Apostolakis made it clear to the US that Athens wishes to upgrade the Hellenic fleet, as a large part of current developments are in a maritime environment. Greek staff officers cannot ignore the fact that Ankara is expected to take delivery, between 2020 and 2025, of a total of six type 214 submarines from Germany – a development which will balance Greece’s current superiority in this sector. Although Athens has begun talks with France concerning the supply of the well-known [email protected]@ “digital frigates”, it is investigating all options which could satisfy short and longterm needs. The request for the transfer of two Arleigh Burke-class destroyers is of course not new. It has been expressed in the past, but as these vessels are equipped with the Aegis radar system, it is not easy to obtain Congressional approval for the transfer (even in some form of leasing for a specific time period). Another idea tabled was to move two of the four Arleigh Burke destroyers (USS Carney, USS Donald Cook, USS Porter, USS Ross) stationed at the base at Rota in Spain to Souda Bay. The Souda Bay base has the infrastructure required for their docking, and their presence there would send clear messages to Ankara.

However, within the context of examining the full range of options, one idea would perhaps be for Greece to participate in the “Freedom” class littoral combat ship construction programme. This new model of vessel develops high speeds, has strong anti-aircraft capabilities, and the program’s development is gaining new momentum, as Saudi Arabia has agreed to purchase six of these vessels. The cost is higher than that of the french “[email protected]@” class, but at the same time this is a long-term program.

Finally, the Greek request for the possible supply of MQ-1 Predator unmanned aerial vehicles (UAVs) was also put on the table. Their entering service with the Hellenic Air Force would greatly increase aerial surveillance and control capabilities in the Aegean Sea and the Eastern Mediterranean, in conjunction with the gradual delivery of the upgraded P-3 Orion aircraft. At the same time, this would be a very effective response to Turkey’s emerging transition to the use of drones over the Aegean, while it would reduce both the risk of accidents for Greek pilots and the cost for fuel and maintenance of fighter aircraft. The Greek side considers that the MQ-1 could be integrated seamlessly following the two countries’ agreement to station US MAP-9 Reaper UAVs at Larissa AB, as the Greek personnel required could be easily trained.

What mr. Pompeo means speaking of “strategic dialogue” with Greece

Could Greece be a strategic substitute to Turkey in the region? This question is answered after the recent meeting of Greece’s Foreign Minister, Nikos Kotzias, with his U.S. counterpart Mike Pompeo. It was a successful meeting in a warm climate, judging from the State Department’s official announcement: “the two ministers discussed the excellent level of bilateral relations and agreed to consolidate the U.S.-Greece strategic dialogue in key areas of co-operation. Mike Pompeo congratulated Greece on its leadership role in the region, including efforts to address the challenges in the Balkans and the Eastern Mediterranean.”. 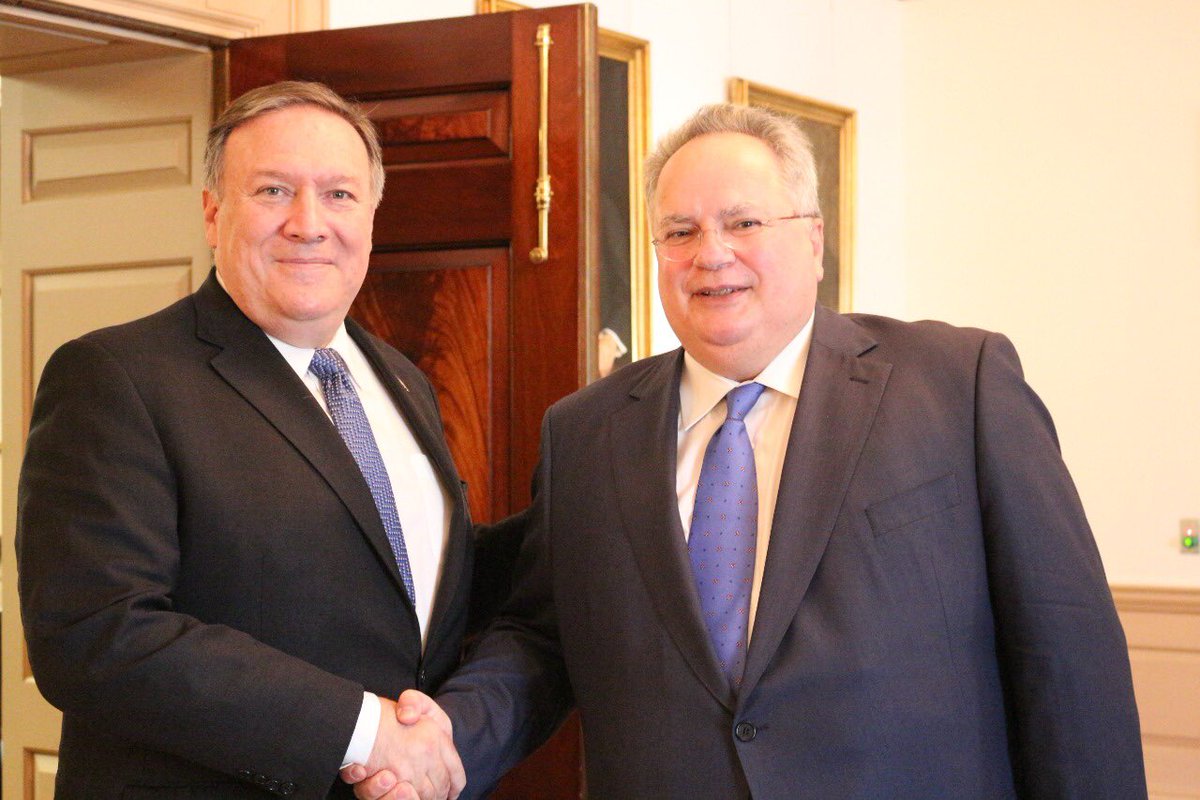 They discussed about the current situation in the Eastern Mediterranean and the Middle East, regions where the U.S. has major interest, and they had a constructive dialogue concerning Greece’s ability to assist, together with other regional countries, to sustain the new American “front”. They, also, exchanged thoughts concerning regional energy matters, due to the fact that the likely possibility of EastMed’s construction and the according security issues which will be risen in the Eastern Mediterranean, energy routes will be in the centre of mutual concern between peripheral stakeholders such as Israel, Egypt and Cyprus. Mr. Pompeo’s public statement about Greece’s “leadership role”, is very important and contains special meaning.