The recent attacks on the “Arab Pipeline”, connecting Egypt, Israel and Jordan, as well as ARAMCO’s facility in Jeddah, arise the “all-time-classic” issue of the Critical Energy Infrastructures’ security and defence requirements.

Offshore drilling rigs, either fixed or floating, underwater drill sites, underwater pipelines for connecting the rigs to the drill sites, pipelines transporting oil and gas produced from platforms to the coast, make up a very extensive energy infrastructure grid. The security requirements of the Critical Energy Infrastructures (CEI) are more demanding than ever.

Given its strategic importance and evident vulnerability, Critical Energy Infrastucture (CEI) is an attractive target for terrorist attacks. Terrorism is one of the tools used by organizations and individuals that wage asymmetrical warfare against a superior foe.
Some groups use terrorism as the first step in an armed struggle, for example to raise public support for its cause up to the point of sufficient strength to conduct conventional warfare. It can sometimes also be used as a supplement to conventional warfare, when it is employed distract and disrupt the enemy by attacking vulnerable targets at the enemy’s rear. This strategy is used by the Afghan Talibans and also by ISIS.

In many countries where insurgencies have occurred, CEI was an important element, target, or an instrument of warfare. The entire infrastructure supporting the oil and refined products industry is quite complex and is vulnerable to damage by insurgencies with belligerent purposes. Centralized energy systems controlled by the government attract insurgent attacks in order to damage the government’s credibility in the eyes of its citizens and potential investors and thus undermine its funding and economic stability. CEI is therefore an attractive target to control or to damage by insurgent groups.

UPDATE 3: ISIS claimed attack on another gas pipeline in the Sinai

On December 25, ISIS claimed responsibility for an attack on another gas pipeline in the Sinai Peninsula in eastern Egypt. The attack, which took place a day earlier, targeted the main pipeline suppling the city of Arish in North Sinai with gas. Residents of the city shared on social media videos showing large flames rising from the pipeline.
In a statement published by its news agency Amaq, ISIS said its cells blew up Arish’s main gas pipeline using several improvised explosive devices. The Governor of North Sinai Mohamed Abdel-Fadil Shousha said the attack didn’t effect gas supplies to Arish, its industrial zone or the nearby power station. The large fire was quickly extinguished by firefighters and workers of the Egyptian Natural Gas Company. According to Shousha, Egyptian security forces launched an investigation into the attack combing the surroundings of the pipeline.
This was not the first such attack by ISIS cells. On November 19, the terrorists blew up the al-Arish-al-Qantara gas pipeline in North Sinai. The ISIS influence in the Sinai Peninsula appears to be growing once again. The terrorist group is carrying out bigger, bolder attacks, despite the immense efforts by Egyptian government forces.

Late on December 17, a rocket attack targeted a U.S.-led coalition base in one of northeastern Syria’s largest oil fields. Local sources said several rockets struck the base at the al-Omar oil fields in the late hours of the night. The rockets landed as a U.S.-led coalition convoy was entering the oil fields. No casualties or material losses have been reported, thus far.
Following the rocket attack, U.S. forces carried out a combing operation in a graveyard next to the oil fields. Coalition fighter jets and attack helicopters backed the operation.
There was no immediate claim of responsibility for the attack. ISIS remains the main suspect. Its cells are highly-active in southeastern Deir Ezzor. In the last few years, the terrorist group’s cells carried out many attacks on the al-Omar oil fields.
Earlier this year, the U.S.-led coalition expanded its base in the al-Omar oil fields. The U.S. claims its troops are present in northeastern Syria to “guard” oil fields from ISIS. While this was not the first such attack on an oil facility occupied by the coalition, it is without a doubt an example of the growing threats to U.S. troops in northeastern Syria.

UPDATE 1: Oil Wells On Fire After Attack On Iraqi Oilfield

A terrorist attack set ablaze two oil wells at a small oilfield in northern Iraq on Wednesday, but total production at the 25,000-bpd field has not been affected, the oil ministry of OPEC’s second-largest producer said.
According to the Iraqi oil ministry, quoted by Reuters, explosive devices were set off at two wells at the Khabbaz oilfield, which is located 20 kilometers, or 12 miles, southwest of the large northern Iraqi city of Kirkuk. Oil production from the two wells doesn’t exceed 2,000 bpd, the ministry said. Sources from Iraq’s state-controlled North Oil Company (NOC) told Reuters that technical teams had isolated the two wells that were burning, with no impact on oil production.
There were no immediate details given by the Iraqi oil ministry as to who could be behind the attack. The incident, while negligible to global oil supply and oil prices, highlights the security concerns that Iraq -OPEC’s second-biggest producer behind Saudi Arabia- continues to face.

The Houthi rebel group in Yemen announced early Monday it targeted a facility of Saudi Arabia’s state-owned oil company ARAMCO in Jeddah. The Ansar Allah movement (Yemen’s Houthi) claimed that they had fired a missile at the oil facility and successfully struck it.

The Houthis claim that the Quds-2 is a new generation “winged missile” produced by their Missile Forces. As always, the missile was likely assembled thanks to technical assistance from Iran or Iranian-supplied components.  That facility is located southeast of Jeddah’s King Abdulaziz International Airport. Over the past years, the Houthis have repeatedly pounded the military section of the airport with missiles and drones. Therefore, it was just the question of time, when the nearby oil infrastructure would be hit.

A Houthi military spokesman, Yahya Sarea, said the attack was carried out with a Quds-2 type winged missile. He also posted a satellite image with the label “north Jeddah bulk plant-Saudi Aramco”. Google Maps shows a facility matching that image and description on the northern outskirts of Jeddah. “The strike was very accurate, and ambulances and fire engines rushed to the target,” Sarea said.

Saudi Arabia confirmed the claim made by the group’s military spokesman, who warned foreign companies and residents in Saudi Arabia to exercise caution as “operations will continue”. According to reports, the missile strike on Saudi Aramco oil facility caused an explosion and a fire in a fuel tank.

Yemen has been beset by violence and chaos since 2014, when Houthi rebels overran much of the country, including the capital Sanaa. The crisis escalated in 2015 when a Saudi-led military coalition launched a devastating air campaign aimed at rolling back Houthi territorial gains.
More than a year ago, on September 14th, 2019, Saudi ARAMCO reported fires at its Abqaiq and Khurais facilities. At the time, about 200 people were in the Khurais facility, however, the fires were contained a few hours later, according to company’s officials. They said no one died in the incidents, though they left unclear whether anyone was injured in the attack.

Several unmanned aerial vehicles (UAVs or drones) were reported to be involved. A spokesman for the Saudi-led coalition fighting Iranian-backed rebels in Yemen, stated that 25 drones and missiles were used. Both the US and Saudi Arabia blamed Iran for the attack, while the Houthis actually claimed responsibility.

On Egypt’s Sinai Peninsula, a separatist movement is active, the Egyptian branch of the Islamic State, with particularly close affiliations to ISIS, aiming to autonomy for the province and the establishment of a caliphate. The movement essentially began in 2011, taking advantage of the collapse of the Hosni Mubarak regime and the turmoil that followed in the country. There followed successive Egyptian army operations in the region to suppress the separatist movement, which were stepped up after the current president General el Sisi came to power in 2013.
In February 2018, forces of the Egyptian military and the interior ministry launched a large-scale operation, both in the Central Sinai and in areas of the Nile Delta. The operations started as a result of a blind but very bloody terrorist attack by armed separatists on Sinai’s Al-Rawda Mosque on 24 November 2017.

The El Arish-Al Qantara natural gas pipeline, also sometimes called simply the Arab pipeline, has been subject of multiple attacks in recent years, given it links Egypt and Israel.
In February 2011 near El Arish the separatists attacked and destroyed the gas pipeline connecting Israel and Jordan with Egypt since 2009. Several bombings against the pipeline followed that same year, leading to a disruption of natural gas flow in July of that year. Since then, dozens of similar attacks have been staged (October 2014, May 2015, January 2016). East Mediterranean Gas (EMG), the manager of the pipeline of the same name, and Israel Electric Corporation (IEC) have claimed and received, following arbitral proceedings in Switzerland, $1.8 billion in damages for the interruption of the pipeline’s flow. The amount of the compensation is merely an indication of the significance of financial damage caused by the violent disruption of the pipeline’s operation.
Since then, the situation appeared to be under control by Cairo, but the autonomous movement and the fanatical Islamists with various international connections (ISIS, ISIL, al-Qaeda, e.t.c.) remained a serious threat to Egypt’s energy infrastructure, mainly on land and secondly at sea.

Egypt’s military has confirmed on Friday that a “limited explosion” struck, one more time, the vital natural gas pipeline in the northern part of the Sinai peninsula on Thursday. The announcement followed the Islamic State’s one via its Telegram channel that it sabotaged the gas pipeline.
Egyptian security officials described that at least six masked militants planted explosives under the pipeline near the remote town of el-Arish, while Reuters cited witnesses who said they saw a major blast in the process.

However, despite regional news reports airing footage of a fireball over the sight reaching high into the sky, authorities said it didn’t impact gas transport and that the pipeline is still operational. According to a report, “North Sinai local authorities said in a statement the fire had been extinguished and it had not affected gas supplies.”
ISIS claimed it caused “great material damage” to the line but didn’t offer credible evidence. 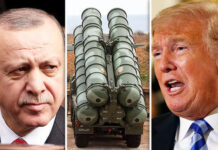 Contact us: info@semedenergydefense.com
© Copyright 2018 Semedenergydefense | Powered by Distemicha
We use cookies to ensure that we give you the best experience on our website. If you continue to use this site we will assume that you are happy with it.Ok
This site uses cookies: Find out more.