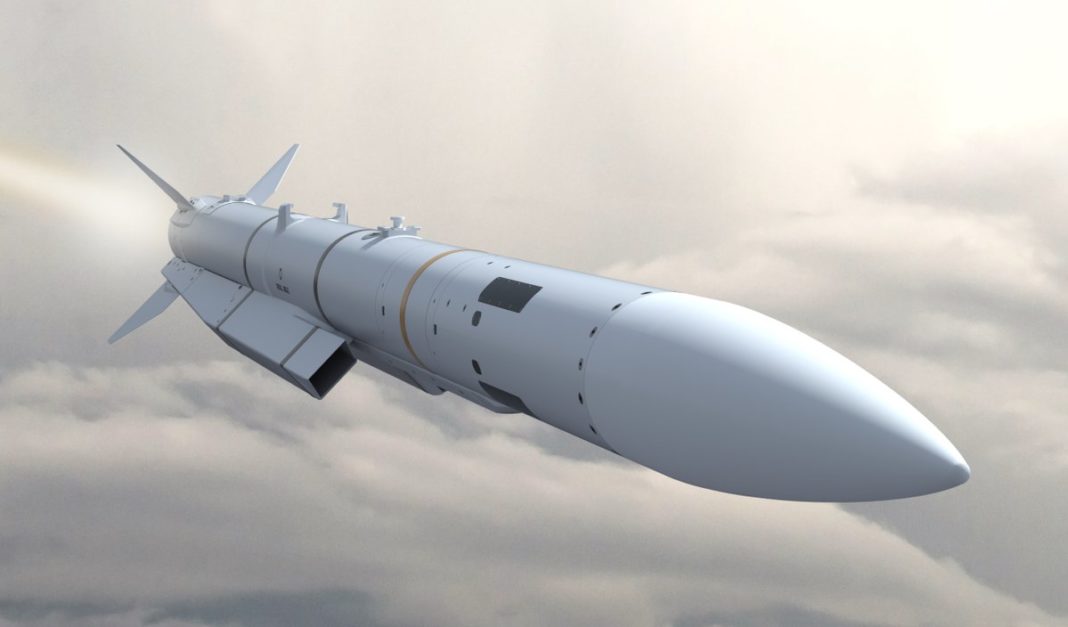 Italy has huge interests in the Eastern Mediterranean where the presence of ENI, SAIPEM and SNAM is massive between Egypt, Cyprus and Lebanon, areas where huge deposits as Zohr and Calypso have been found. It is worth noting too, that ENI has obtained the concession for exploration offshore of Crete, making Italian commitment in the area very intense in the near future.

The rush looking for gas and hydrocarbons that has been initiated by all Mediterranean countries in offshore of their exclusive economic zones, is causing instability, disputes and deterioration of the ancients and unresolved issues of sovereignty and defense of waters (this is the case of litigation, Greek-Turkish Cypriot/Greek-Turkish, Lebanese-Israeli and that Palestinian-Israeli).

All these result in new operational profiles for the Italian armed forces, especially the Italian Navy and the Air Force, both called upon to operate in completion in order to defend present and future platforms and aerial, naval and underwater pipelines affected by threat. It is interesting to note that the Israeli Navy is providing point defence system or C-RAM, the IRON DOME, also for naval applications for the defense of the Israeli coastline gas mining platforms, from possible attacks from the Lebanese coast or by fast and stealthy missile speedboats.

Owning weapon systems like the ASTER BLOCK 1 NT and CAMM-ER means being able to ensure the defense of these sensitive targets, like platforms offshore mining at a distance, creating a sort of bubble of air carriers, with joint deployment of A2AD CAEW, KC767A, Typhoon, Tornado and F-35 into perspective, as well as their maritime defense with upcoming PPA and the newly DDG-X that can take on any threat from the air, sea and land.

At the end of 2017 and the early months of 2018, there were two important innovations for the Italian defense, with the green light of the mid-June 2016, ratified by the Government Commission Parliament’s defense. The Italian participation to the programme launched by Paris in December 2015 for developing a specific missile, ASTER 30, a version produced by EUROSAM Consortium and the industrialization of the brake medium-range antiaircraft missile defense system CAMM-ER, derived from short-range missile defense system CAMM, developed by MBDA UK for the British army and Navy requirements, for the replacement of the Rapier and Sea Wolf, now obsolescent having been deployed since the 1980s the past century and now deprived of the possibilities of further improving.

By participating in the program and the launching of ASTER 30 BLOCK 1NT program CAMM ER, besides achieving high operational capabilities, technical and industrial benefits will be obtained because the Italian industry will be called upon to invest the best human and professional resources, increasing even more the quality profile of missile systems in question.

In a span of a few years, Italy will get new missile defense capabilities for the armed forces, that will be called upon to manage increasingly complex scenarios and increasingly complex and dangerous threats, emphasizing that Italy can assure the defense of an area at land as at sea, as well as to guarantee the security of NATO and/or other allies against such targets as the MEDIUM-RANGE BALLISTIC MISSILE. This means, also, ensuring indirectly defense to countries that “host” in their waters offshore platforms, with obvious benefits in terms of operations and international prestige. This involves envisioning a greater commitment of the Italian Navy and Air Force in the waters and in the skies of the Eastern Mediterranean, with permanent or semi-permanent operating deployments, apart from the national bases.

This version was created by having to cope with increasingly complex defensive needs, born from large-scale dissemination of short and medium range ballistic missiles, cruise missiles and naval surface-to-surface missiles in high field performance, not only of supersonic cruise but also with a high range, all targets particularly difficult to deal with and at present cannot be intercepted with missiles if not under certain conditions and with various types of systems. The current system ASTER 30 has an active role in NATO ALTBMD (Active Layered Theatre Ballistic Missile Defence) programme, active layered defense against theatre ballistic missile to defend Allied contingents from missile threats and as such, it represents the Italian-French contribution to this vital program. 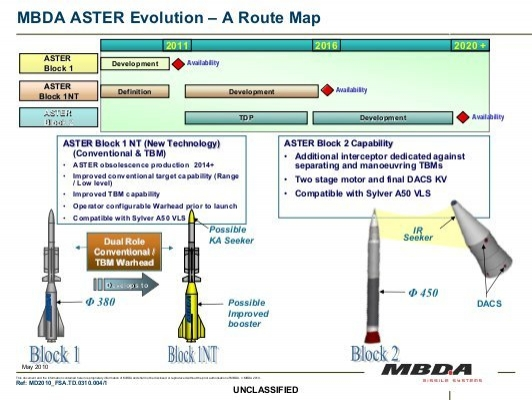 The naval version of the missile ASTER 30 PAAMS Type 45 version is currently embarked on the Royal Navy, DDG “Doria” and “Duilio” of the MM and the FFG “Bergamini” (Fremm G.P.) and “Mada” (Fremm ASW), and on two DDG “Chevalier Paul” of the French Navy. The land version SAMP-T is currently deployed in southern Turkey to defend the country from any aggression coming from Syria. 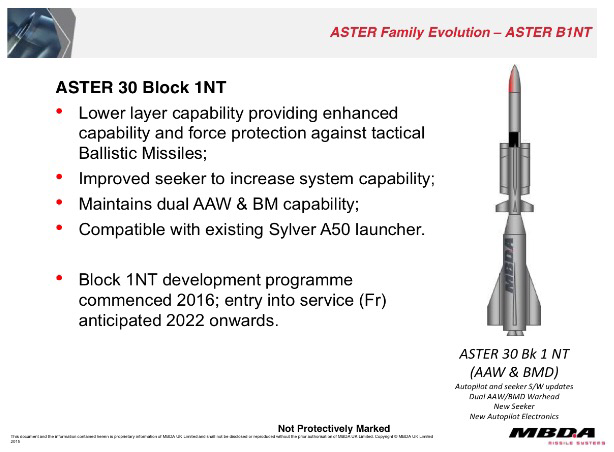 The program is managed by OCCAR (Organisation for Joint Armament Cooperation) and by EUROSAM, the Consortium created by Thales and MBDA and the contract covers the development of new ammunition, as well as the possibility to use the current version with the new Block 1 Block 1 NT version

CAMM ER is the evolution of CAMM, British born missile to replace the Rapier in the British Army and the RAF as well as the Sea Wolf in the Royal Navy Type 23 frigates. The program begun to replace the Aspide/Skyguard and Aspide/Spada respectively in the Italian Army and the Italian Air Force for short-range defense of troops, civilian and military installations. Recently, there has been confirmation that the Italian Navy too, intends to use the system, complementary to the two aforementioned Military-Naval version development that should take the place of older systems Aspide/Albatross still in use on the CG “Garibaldi”, DDG “Mimbelli” and “De La Penne” and the residual FFG “Maestrale”. Subsequently, the CAMM will replace the current ASTER 15 spent by “Cavour” and “Duilio” and will be deployed on DDG “Doria” class and FFG”Bergamini” class and “Margottini” class, on PPA Full unit and Light Plus and with each odds on future DDX pair that you start talking and the new multi -purpose Patrol deep-PPLa or Light should integrate the largest PPA, replacing the current Constellation class OPV-Vega and NUMC or Lesser Fighters (new units of corvette read basically) class Comandanti.

The CAMM ER is being developed by MBDA Italy, obviously in competition with the whole group MBDA and particularly with MBDA UK that developed first the air-to-air missile ASRAAM of which CAMM retains structural components and motor, then the SEA CEPTOR which is the naval version of CAMM, embarked on FFG Type 23 to replace obsolete Sea Wolf and is integrated into the PAAMS Type 45 Daring class on DDG and intended to be installed on new FFG Type 26.

The naval version of the Sylver A50 Launcher will be used by CAMMER quadruple version augmenting exponentially the number of missiles on board for each pitcher. The land version also may employ more missiles within the same canister by increas ing the capabilities of engagement. For the Italian Air Force the SIRIUS will be integrated into the complex system that CAMM ER, the hoped-for full version, should also have the capability of missile defence, currently not covered cause it was not financed, the phase of industrialization of the Medium Extended Air Defence system MEADS or System that will be deployed from Germany. The Italian Army, however, intends to replace the existing Aspide/Skyguard with the new missile, building real clusters with more stable ASTER 30 BLOCK 1 and BLOCK 1 NT.

The missile is compatible with any kind of surveillance radar for the detection of targets. Vertical launch mode allows you the ability to engage targets in all areas to 360°, making the missile a seeker-weather active RF (Radio Frequency). Having that particular seeker CAMM ER does not require a dedicated and expensive lighting and shooting radar and also has a great stamina to clutter.

Particular to CAMM ER is the presence of dual data link between missile and launcher that allows control of the rocket in case of malfunction. Other features of the missile are the minimum required maintenance and logistical support. The CAMM ER is characterized by the high rate of simultaneous fire against multiple targets. The missile launch is in portrait mode with cold launch system, which allows the missile to activate the booster away from the canister and battery with obvious benefits in terms of safety of the personnel.  Another interesting fact is that the missile costs considerably lower than the ASTER 15, that its complex technology for high performance demands considerable cost.