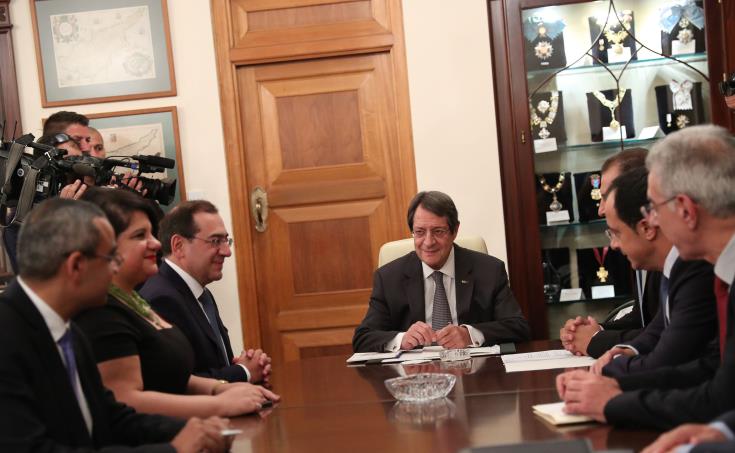 Nicosia and Cairo create a single security area and network of partnerships in the Eastern Mediterranean.

Following the recent tripartite meeting of Egypt’s Foreign Minister Sameh Shoukry Friday with his Greek and Cypriot counterparts Nikos Kotzias and Nicos Christodoulides, concerning the arrangements for holding a three way summit in Greece between President Abdel Fattah El Sisi, Cypriot President Nicos Anasiastades and Greek Prime Minister Alexis Tsipras. today Cyprus’ Energy Minister Yiorgos Lakkotrypis and his Egyptian counterpart Tarek El Molla will sign the agreement on the construction of an underwater pipeline in the Eastern Mediterranean, as part of a joint effort to commercialize the gas quantities found in the AOZ of the two countries.

This pipeline will start from the sea area within the Cypriot Exclusive Economic Zone, transferring the natural gas from Cypriot plots to Egypt, which has the necessary infrastructure to process and convert it into liquefied natural gas (LNG), with the aim of exporting it to Europe. The start will be made with plot 12, called “Aphrodite”.

Nicosia and Cairo seem to be launching the construction of this pipeline to create a single security area and network of partnerships in the Eastern Mediterranean. “This is a mutually beneficial agreement, not just for Cyprus and Egypt, but mainly for Europe”, said Tarek El-Molla, Minister of Oil and Mineral Resources of Egypt.

Egypt in the meantime has reached an agreement with the Dutch company “Shell” and Petronas (Malaysia), to investigate an area west of the Nile river, worth USD 1 billion, in order to conduct twelve drillings in total to identify potential oil and gas fields. This move is part of the country’s biggest effort to become a regional energy hub, focusing mainly on LNG, as already the particularly encouraging results, especially after the Zohr deposits was discovered by the Italian ENI, have attracted international investments and geostrategic interest.