Home Energy Articles “Energy War” in the Eastern Mediterranean. Is this the new “Big Game”? 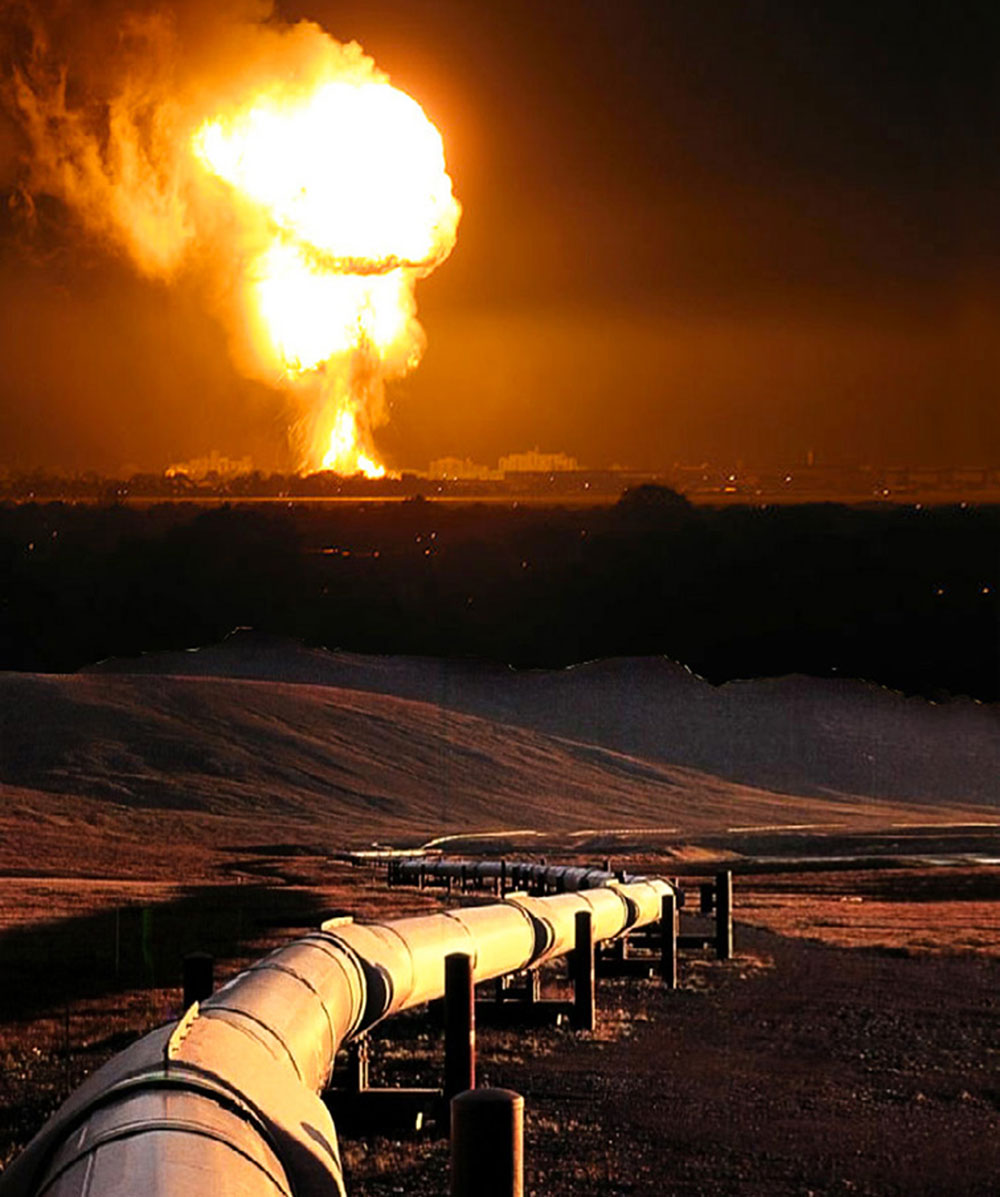 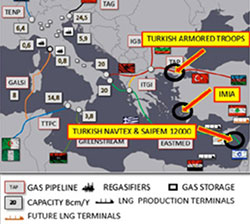 The Eastern Mediterranean is becoming one of the top 21st Century “Big Games”, that is about the new energy sources for Europe which is seeking to lessen its dependence from the Russian gas.

In the meantime, the Turkish armed forces put in being a set of other provocations, around the Greek Imia islands (with the clear goal of questioning the Treaties that define Greek and Cypriot EEZs) and in the area of Edirne, with armored and mechanized troops maneuvers close to the Greek borders, as well as the arrest and the long imprisonment of two Greek officers in the Greek-Turkish borders. The latest “episode” which is unfolding, is Turkey’s plan to send the exploration vessel Deepsea Metro II in the Cypriot EEZ. It is, almost, certain that it will be escorted by Turkish warships, with Cyprus unable to do anything to stop it.

Should we make the math of the combined result of threats, we have the following astonishing result: TAP, ITGI and East-Med pipelines capacity is 40 Bcm/y. One third of the Italian annual consumption. LNG reserves raise this toll to a level that is enough to make Europeans anxious. Anxious but still, unable to protect their interests outside the NATO umbrella. NATO and EU are anyway two different organizations with different interests.

When inhabitants in Rome switch their living room lights on and industrialists in Milan power their industries, they don’t even suppose how much of this is linked to Greece and how even more this will be in future. Nor they know that the Eastern Basin of the Mediterranean is home to large Italian investments, in order to secure the next 4 decades of Italian energy supplies.

Italy is the third largest economy and second largest industry in the EU. Notwithstanding a successful switch towards renewable energy, the Country still heavily relies on energy import, especially crude oil and natural gas.

Furthermore these traditional areas as well as the whole Mediterranean Basin and Europe itself, are currently home to major geopolitical events, complicating the future scenarios and energy supply security.

USGS, IEA and IFP estimations, along with recent exploration and developments show that the Mediterranean Basin offers a solution to the above threats to the EU economy and security, thus needing an increase security and defense approach by the EU/NATO Countries.

Italy has its own production of natural gas and crude oil, plus some respectable reserves. Still, this is largely insufficient to feed the country’s basic needs and its strategic independence. Over the 80% of energy depends on import, making the Italy extremely vulnerable in terms of independency. Geographic origin of supplies clearly shows a problematic distribution, with the greatest share coming from potential crisis areas.

Very recently, on 12 December 2017, an accidental explosion occurred in a compressing station – valve station in Baumgarten, Austria, 50 km northeast of Vienna, with one fatality and 21 injuries. This particular facility receives Russian natural gas via pipelines from Slovakia and transports it primarily towards Italy, and secondly towards Germany, Hungary, Slovenia and Croatia. The accident occurred during severe cold weather conditions affecting central and northern Europe. The consequences of this supply disruption, which in fact lasted less than 24 hours, were cataclysmic.

The competent Italian minister declared a state of emergency regarding the trading and distribution of natural gas, stating as a matter of fact that had the TAP already been operational this would have been avoided. Gas prices in Italy almost doubled. At lower percentages, prices also rose in the rest of Western Europe due to the increase in demand. Prices of other energy commodities, such as Brent oil and coal, also rose, while commodity futures prices for all energy commodities were also significantly affected. Although the disruption in Austria lasted a short time, the consequences were extremely severe especially for Italy and secondarily for the other countries. In practice, the need of securing Europe’s energy supply and for alternative power sources and routes was once more highlighted. 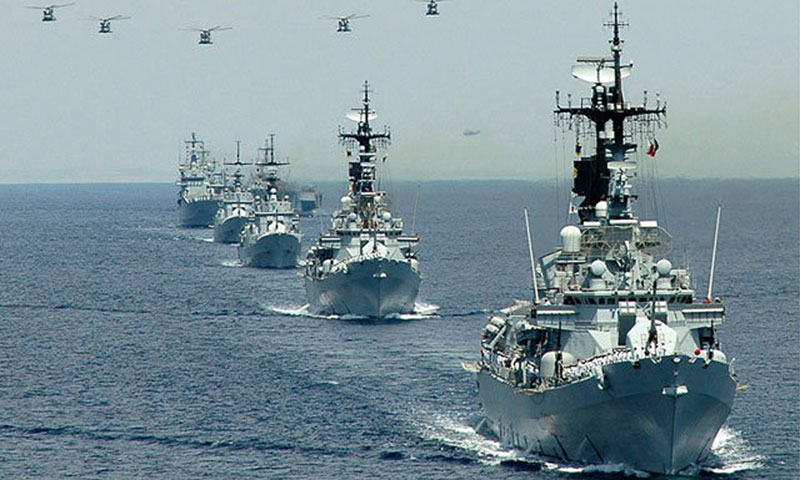 Various sources among which the USGS, the IEA and the IFP, estimate that the Mediterranean basin hosts relevant reserves of both oil and natural gas, able to cover the EU needs for the next 35 years if efficiently exploited.

The estimated reserves in the Eastern Mediterranean are located in four main areas: the Levantine Basin, the Nile Delta Basin, the Nile Cone and Greece (Crete, Herodotus, Corinth and Ionian). These areas include a number of Countries: Egypt, Greece, Cyprus, Israel, Lebanon and Syria. Turkey doesn’t look like playing a relevant role in the reserves distribution, due to its limited EEZ.

The Eastern Mediterranean is vital for the Italian interest because: 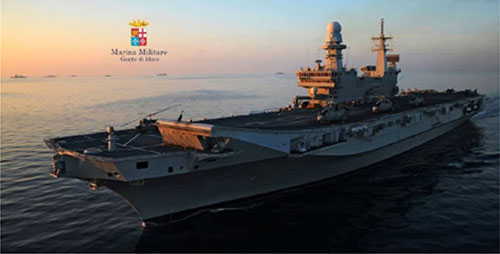 The basic projection tool the Italian Military has foreseen for a rapid overseas operation is called «Overseas Projection Force» (Forza di Proiezione dal Mare – FPM). The FPM is the instrument of first intervention in case of international crisis requiring the protection of Italian citizens, assets, and/or interests overseas. The force is composed of:

The Naval section Escort Group based upon

The Amphibious Group based upon:

The Air Force will contribute specialized assets according to necessity and distance from bases. Other Army assets can be detached, like 2 platoons of MBTs to strengthen the FPM as needed.

Greece and Cyprus host the most of the Italian assets in the area and Greece is pivoting the most of resources via four (4) gas pipelines, which will cover up to the 30% of the Italian natural gas consumption, one electricity 500 MW power connector, 2 LNG stations. 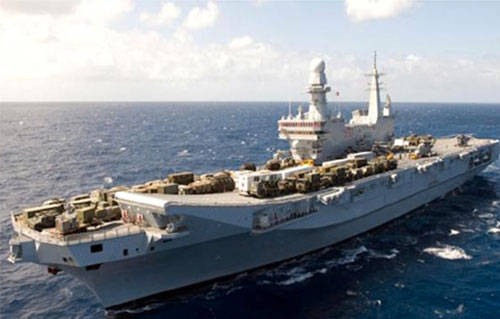 The need for enhanced security in the region

Several ongoing issues threaten the exploration, production, and transit of energy resources in the Eastern Mediterranean, especially the security environment, territorial disputes, and the macroeconomic climate. Recent developments, together with the uncertain future of the wider area (Balkans, Middle East, North Africa), suggest the need for enhanced security. Ongoing territorial disputes between several eastern Mediterranean countries, especially the Turkey-Greece-Cyprus disputes over their respective EEZs, could hinder exploration and development in the region, particularly in the offshore Levant Basin. Disputes over maritime boundaries jeopardize joint development of potential resources in the area and could limit cooperation over potential export options. 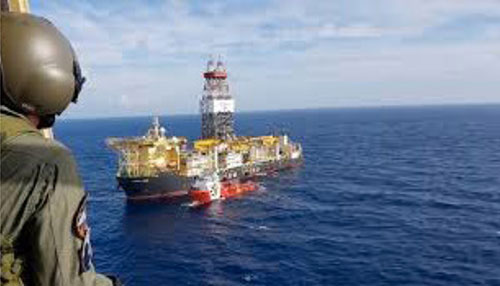 In order to secure its vital interests the Italian Government has created a new comprehensive strategy: the «Wider Mediterranean» (Mediterraneo Allargato). The focus is securing all the main routes, sources, and national interests in a wide area, from the Atlantic to the Pacific Ocean.

The Italian Strategy foresees a number of possible scenarios, including symmetric and non-symmetric operations such as: 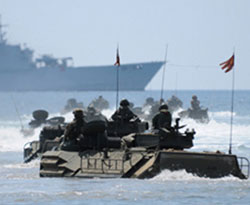 The strategy is centered on a progressive increase in military spending from a mere 1.04% of GDP a few years ago, to present 1.42% and the target of the 2% to be reached in a decade. Fiscal Year 2018 has seen this trend further consolidation with a +4% in military budget and a significant +15% in new inv estment & acquisition programs (investments & acquisition total today the 30% of the total budget). Currently the Budget has reached the amount of about 25 Bn€. To this amount an extra 17 Bn€ in 10 years must be added as “special funds” to supporting all hi-tech programs, including the «Space», «Net Centric Forces» and the «Future Soldier» Programs.

The scope is to set a technological hedge over potential regional threats, with a full range of force multipliers available. Another pillar of this strategy is the participation of the Italian Armed Forces to International PK and PE missions, always including «combat» status. All personnel are 100% professional soldiers.

In the last years the Italian forces are working strictly in cooperation with respective partners (NATO, EU, Israel), in order to increase defense capacity of common interests and assets. In particular Italy, Greece, Cyprus and Israel, show an increasing level of joint operations and military exercises. Italy is also rumoured to join Greece, Cyprus and Egypt to strengthen furthermore the control over the Eastern Mediterranean.

Would it be possible to further integrate the armies of the respective countries, in order to protect more efficiently and rapidly their many common interests and investments? This would need more firm political decisions, as well as a full strategic and military study, however we can highlight some potential advantages:

The question of European energy security has brought attention to the strategic significance of South Eastern Europe and Mediterranean regions as sources, as well as transport hub, of natural gas and other forms of energy.

The Eastern Mediterranean Basin and the Balkans will be key regions of Europe’s energy security, with USGS and IEA estimations showing confirmed and potential O&G reserves able to satisfy growing EU energy demand over the next 35 years at least.

The estimated reserves in the Eastern Mediterranean are located in four main areas: the Levantine Basin, the Nile Delta Basin, the Nile Cone and Greece (Crete, Herodotus, Corinth and Ionian). These areas include a number of Countries: Egypt, Greece, Cyprus, Israel, Lebanon and Syria. Turkey doesn’t look like playing a relevant role in the reserves distribution, due to its limited EEZ, however it seems that has not accepted this fact and tries to enforce its revisionist view.

The area is subject to threats that could create further instability and risk for the security of infrastructures and further investments. Several ongoing issues threaten the exploration, production, and transit of energy resources to Europe, especially the security environment, territorial disputes, and the macroeconomic climate. Recent developments, together with the uncertain future of the wider area (Balkans, Middle East, North Africa), suggest the need for enhanced security. Ongoing territorial disputes between several eastern Mediterranean countries, especially the Turkey-Greece-Cyprus disputes over their respective EEZs, could hinder exploration and development in the region, particularly in the offshore Levant Basin. These disputes over maritime boundaries, jeopardize joint development of potential resources in the area and could limit cooperation over potential export options.

South Eastern Mediterranean Energy & Defense is a unique Newsletter dedicated to Energy and Defense developments in the region which aims to:

We are a team of experts in the energy and defense industries who, together with the team of “Flight & Space” (ΠΤΗΣΗ & ΔΙΑΣΤΗΜΑ) magazine*, shall present you in-depth reports and analyses, focusing on the “who is who” and “whys” behind the major events.

*“Flight & Space” (ΠΤΗΣΗ & ΔΙΑΣΤΗΜΑ) is the leading and most authoritative publication in the Defense and Geostrategy fields in Greece and Cyprus, published monthly since 1979, which covers the fields of Civil and Military Aviation, Defense, Land and Naval Forces, Diplomacy and Geopolitics, Aviation and Military History, Space and Astronomy, as well as all related Technologies, through an array of specialized and highly esteemed Greek and International contributors.

He stated that the ENI-Total consortium is examining the future prospects of Blocks 6 and 11 of Cyprus’ EEZ, as well as the commercial exploitation of “Calypso” site. He stressed the importance of the drilling results at “Onisiforos” and “Calypso” targets, which showed that the model of Egyptian “Zor” site is expanding in the Cypriot EEZ.

“Calypso’s” natural gas is of fine quality (99% methane), while the rocks are very good too, two very important indications for the future commercial exploitation of the site.

He, also, said that Exxon Mobil’s forthcoming drilling in Block 10 later in the year, will be another test of “Zor’s” model. At the same time, ENI-Total consortium is evaluating the prospects for future drillings in Blocks 6 and 11.

Mr. Bertelli further stated that if the findings at “Calypso” are evaluated positively, ENI should develop the appropriate options for its commercial development. Referring to these options he said that the company is giving priority to its present liquidation terminal at Egypt, and it’s capability to transfer the liquidated gas to Europe and elsewhere in the Eastern Mediterranean.